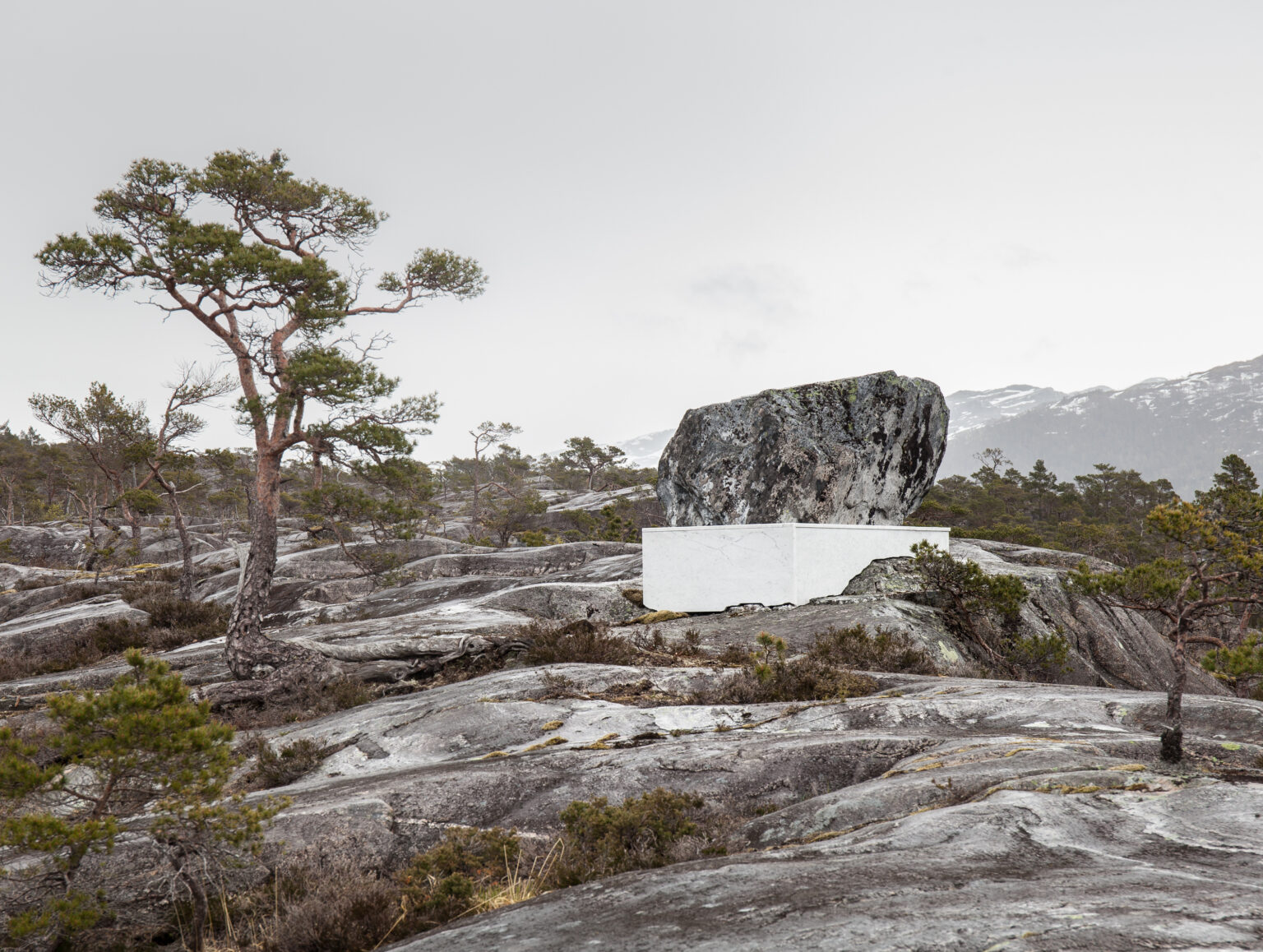 For site-specific installation artist Ingeborg Annie Lindahl, large-scale drawing, intervention, and the transient material of chalk are all powerful ways to explore notions of time, landscape, and environmental change. The artist herself says: “My works comment on western nationalist romantic landscape painting, and problematize how people value duration. A holistic understanding of landscape involves knowledge of how people have traditionally used the landscape, in addition to an awareness of our own alienation from the landscape. I am concerned with a conceptual and emotional approach to the landscape, both political and personal.” In this portfolio, Lindahl provides insights into these themes in major works from the last 10 years of her practice.

Global changes now produce a variety of structural changes and dramatic life experiences that differ from the experiences of past times. Current global society is embracing many potentials and possibilities created by these structural changes,  and increasing its regulation of digital and virtual realities. Our traditional ideas of territory and time are becoming relative, as our experiences of reality become increasingly managed and manipulated. Amidst this chaos, contemporary art fundamentally continues to seek an understanding about the living values of contemporary communities in all regions of the world these days.

Curator Rizki A. Zaelani conceptualized the theme ”encounter” for the 2016 SEA+ Triennale at the National Gallery of Indonesia (where this work was originally shown) to reconsider life experiences achieved by direct interactions and relations that involve awareness and bodily appreciation within space and time. A direct encounter situation ensures the experience is authentic, measures an event as a state that involves awareness of the total body presence and sees present time as a limit that may be achieved by a person’s experience.. Exhibition space becomes a part of the consciousness of each artist. Each encounter experience brings the artist’s work into the consciousness of  other parties (public), where it can represent a life situation that is authentic and direct.

Sørfjorden is a long branch of Hardangerfjorden, known for dramatic landscapes with mountains, fjords and fruit. This has attracted artists and tourists throughout the years. Less well known is that many fjords seabeds are highly contaminated with environmental toxins: including lead, mercury, dioxins, cadmium and PCBs.

Lindahl’s work, Sørfjorden—Sending with Thoughts (which was shown at the Trøndelag Senter for Samtidskunst) contributes with perspective and insight into shadowy aspects of culture and society, by playing on our longing for the beautiful and the ability to close our eyes to over-consumption of resources and littering.

The drawing includes a distorted perspective, so that walking by the drawing is experienced as moving in the landscape. In contrast to Tideman and Gude’s iconic historical painting, Brudeferden in Hardanger, Lindahl has removed all traces of human activity.

This work, originally shown at the Tegnetriennalen 2019—Human Touch, is based on life and the title comes from the Sámi word eallin,  which means “to bring life to.” The work shows a symbol of carbon, which is fundamental in all organic material and life as we know it. Carbon is the fourth most abundant element in the universe by mass and is found in the sun, stars and comets.

The drawing is made with untreated chalk on canvas, and is an exploration of time on a human scale. The small, almost invisible algae in the sea nourish most things under water. At the same time, they have a vital function for life above water. The algae make oxygen that we need to breathe.

A coral is a tiny organism that lives in colonies in the ocean and forms coral reefs in beautiful colors, which have a lot to say for the ocean ecosystem. The coral reefs can be seen as the ocean’s rainforest. When the earth gets warmer due to human-made climate change, it also gets warmer for the corals in the sea, which they do not tolerate very well. There are algae that the corals depend on, and they live together in a symbiosis,receiving nourishment from each other. It is because of the algae that the corals are so colorful. When the temperature in the sea rises, the algae die and the corals do not get nourishment and fade. It becomes a white dead lime landscape.

Lime under heat and pressure turns into marble. In the black marble, Lindahl has carved a portrait of her son, a reference to petroglyphs, and how their design language gives us an idea of ​​life from several hundred years back in time.

This exhibition at Stiftelsen 3,14 in Bergen was a site specific collaboration between Ingeborg Annie Lindahl and Trond Lossius. A collaboration across disciplines, dealing with the process of change exploring the new (climate) reality,the artists explored how experience is mutually influenced by changes in sound and reading of the visual. Lindahl’s chalk-drawing was continuously developed through the week and ended in destruction.

Devoluson Crater (presented by Nordic Artists’ Centre Dale) has its origin in Lindahl’s fascination for how asteroids can both athe source of destruction and creation of life. Through a personal approach to the material used in the art piece I’d like to systematically inquire into the socio-political and natural frontiers in the landscape. Today it is widely accepted that the impact of a massive meteorite, which caused a global natural disaster, led to the mass extinction of the dinosaurs. It might be less known that asteroids and comets are thought to be the source of all water found on earth, and perhaps all organic matter on earth. Lindahl is inspired by how asteroids can give a situational picture of earth as we know it. Her aim is to spark that little bit of curiosity, to make people ponder; what is shaped by nature, what is shaped by man?

What is the value of an art piece that looks so much like the landscape that it might not be interpreted as an art piece? Lindahl’s artistic methods are inspired by cycles and circuits, and each piece is made with the ambition of planting the piece into the landscape to make it merge with nature. The art piece is an attempt to put our bodies in dialogue with the organic world that they belongs to. Our contradicting thoughts about nature influence our consciences concerning global challenges.

From the stars down to the cellular level, our species are part of the landscape.

Lindahl describes humankind’s problem behavior towards the land  as culturally and socially conditioned, making humans the most destructive species that has ever existed. In Death Drive—Skewed Nature, Lindahl takes a closer look at parallel processes of change in science and plays with the idea of humans as an early stage of becoming a mineral.

Lindahl comments on the narrowness of our vision of time, remarking that our perspective is similar to an ant’s perception of reality. Humans consider themselves large enough and superior to all other species, but lack the ability to see the whole.

Thematically, Focal Depth—Above the Fold focused on transience. The motif for the work was the mountains in south Troms and north in Nordland, with the main drawing depicting Stetinden. In this exhibition project at Trafo Kunsthall, Lindahl explored time and instability in relation to thoughts about conservation.  Inspired by Land Art, Lindahl wanted to take elements transformation into the gallery space. In working with chalk, she was attracted to ideas transience and expulsion. In this project, the main work’s creation process was continued in rhythm with the audience—the chalk drawing on the floor was not treated.

Through the artwork’s creation process, Lindahl considered the paradox between looking at nature as an object and object that can be studied, controlled and constructed, versus an understanding of nature as unknown and uninhibited. The contrast between reproducing nature with methodical control and letting the audience interactively continue the creation of the exhibition became a constant struggle between the controlled and the unknown. To create the motifs for this work, Lindahl photographed Lofoten and the Lyngen Alps from small planes. This became the starting point for her drawings on the floor (seen directly from above) and on the wall (seen towards the horizon). The chalk drawings form a landscape where questions arise related to the future and why we are as we are.

The exhibition Transience was the result of a multi-year artistic exploration project that revolved around the theme of transience and human influence on nature. Lindahl notes that  we often think of nature as something we can trust, an inexhaustible resource that can be exploited by every generation. But now we are beginning to understand that nature is perishable and that resources are limited. It is a paradox that humans today are trying to find sustainable ways to preserve nature, at the same time increasingly destroying the plnet. We are plagued by a waiting grief—a feeling of loss before death.

Lindahl uses chalk as a conceptual framework and material for her work. The transience of the chalk drawing can be associated with nature’s constant changes. Chalk is also the origin of marble, another art material that is central to Lindahl’s practice. She is inspired by petroglyphs and vandalism as a method, and in this series, she experiments with drawing by sketching in photographs on aluminum plates and on marble.

Ingeborg Annie Lindahl (b. 1981) lives and works in Harstad, Northern-Norway. Lindahl develops site-specific installations in various mediums, often working with large-scale chalk-drawings and installations. She explores different variants of the landscape through drawing, both as a research medium, as petroglyphs and vandalism and its position in art history.

In Lindahl’s work field trips and personal experience materialize into large scale temporary chalk-drawings and installations. Chalk associates with geology, biology and epistemology. It is simultaneously permanent and durational, fragile and dwindling, and manifests changes in how knowledge emerges and the constant transformation of nature, often affected by humans.

Lindahl holds a MA in fine Arts from the Bergen Academy of Art and Design. Her artistic work has been exhibited extensively internationally at a wide range of institutions and galleries.

This story is part of the Norway Partner Spotlight. View more content from the Spotlight here

From 2020–2022, the North Norwegian Art Centre is commissioning and presenting a series of art projects in Vardø, a town located in the county of Finnmark in northern…