Artist Spotlight: A Tagish artist on storytelling, protest and embracing a true reflection of herself. 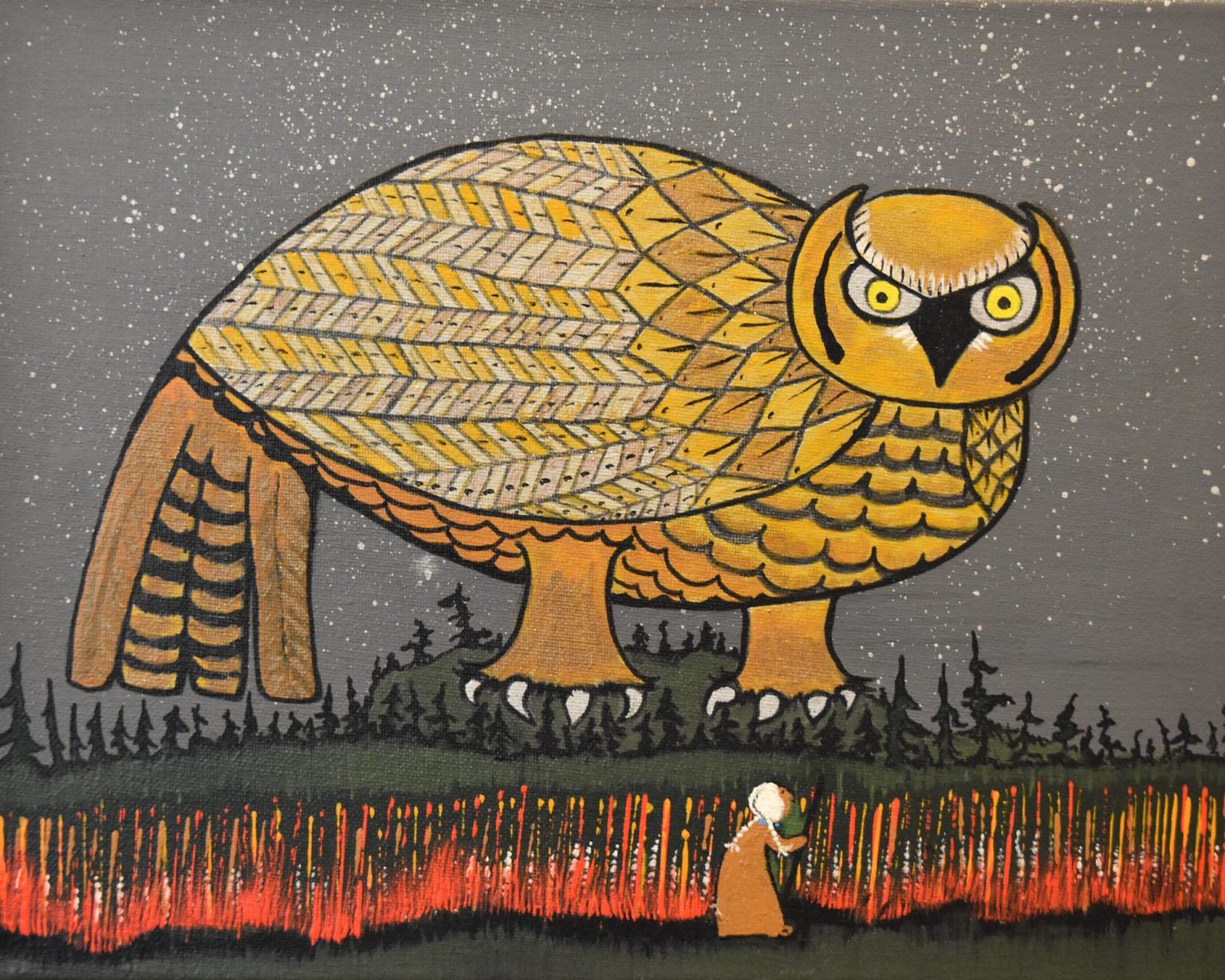 Zhürá (Shirley Adamson) is a painter, collage artist, mother and recovering politician. After a career that spanned northern politics and radio broadcasting, Zhürá has come into her reality as a visual artist. She describes herself first in relation to her family.

Zhürá is a Woman of the Wolf Clan, descended from the Tagish Ch’un, the Tá’àn Kwäch’än, the Tlingit, as well as the K’u Chan. “I was raised by my grandparents prior to going to school. They really had a profound impact on what shaped me. My values. My foundation. Not just my grandparents, but the Elders they were surrounded with. I had such a privileged life. I didn’t quite comprehend that until I got older, and I realized that not everybody lived the way I did and how fortunate I was to be raised like that.”

As Zhürá describes this Indigenous privilege, she acknowledges that she did not see it that way at the time.

“I saw just the way we lived. Later, I began to compare my life with friends and other family members who were in residential and mission schools and in care and in my inexperience, I thought that was a good thing because they had access to electricity, they had access to living in town, and I saw that as something that I wished I had. What I did have instead was unlimited access to language, culture, art and nature, and a people and a way of life that was transitioning, and I didn’t realize that.”

Life in Northern Canada in the mid-to-late 20th century was limited in communications technology. When radio and television did come North, not everyone was afforded the luxury. Entertainment and education programming was delivered the way it had been since time immemorial: through storytelling.

“We didn’t have radio and television, of course, we didn’t have internet. Radio was used for news gathering and checking weather reports, that was it. Grampa had control over that. What I did have was storytelling. That’s how we transferred information. The language was so absolute and precise and filled with imagery that listening to an Elder describe how to travel from say Tá’àn Män to Chu Lin, you had that vision in your mind. It was as clear as if you were looking through that person’s eyes so that if you actually left on your very own to travel that route, you could walk it as if you walked it before.

Coming of age among a people who were not artists by trade but artists by birth informed Zhürá throughout her upbringing.

“I was surrounded by artists. The storytellers. The women and the men who took everyday things from the environment whether it was trees, animal bones, found objects like what you might find at heritage sites now, rusty cans, bottles, and repurpose them to make functional, beautiful tools and other things. There was always a beauty in it. And an appreciation of the women and men who sewed. Because all men had to sew moccasins as well. We all had to do it all.

“They took very basic everyday articles of clothing and made them beautiful with the stitches and designs of piecing them together. Then as what they had available changed, the colours of the beads began to get brighter and they just added that to capture their surroundings. And to also go beyond just replicating the flowers and the leaves, but to put their own personal interpretation on it. I appreciated that. I noticed it. I saw the stitching. I saw the colours. I saw all of that.

“But I was always so busy making a living and raising my family, and raising myself for all intents and purposes, in a changing world, that I never really had time to do that. But because it was so integral to my foundation and who I am, I never lost it. “

And while this work might have kept Zhürá from putting brush to canvas, the life and experience of someone who has held the positions of Chief, radio broadcaster, journalist in changing times, informs the resistance seen in the artist’s work. Zhürá’s paintings capture a conversation that a nation hasn’t always been willing to have.

“I was privileged to be a part of a transitioning world. It didn’t transition into a better world. Our obligation to look after the land and resources have been severely compromised and we see the result of that. So, I do protest pieces. And that, I think, is my own heart and soul screaming out the agony of what I’m seeing. But I also like to do the beauty of who we are, the traditional stories, the colour, the lifestyle. So, you’ll see that blended together.

It’s a true reflection of myself. It’s not somebody’s bio of me or somebody’s description of who I am. It was when I retired and one of my daughters brought some paint and canvases and brushes and said, ‘Mom, you’ve always wanted to do this, so do it.’ And then my children all together started supporting that. So, I began to show myself. Not as others saw me, but as my children and I saw myself.”