Meet the Partner: We sit down with Yukon Arts Centre (YAC) Director Mary Bradshaw to learn more about YAC’s pans for the Arctic Arts Summit. 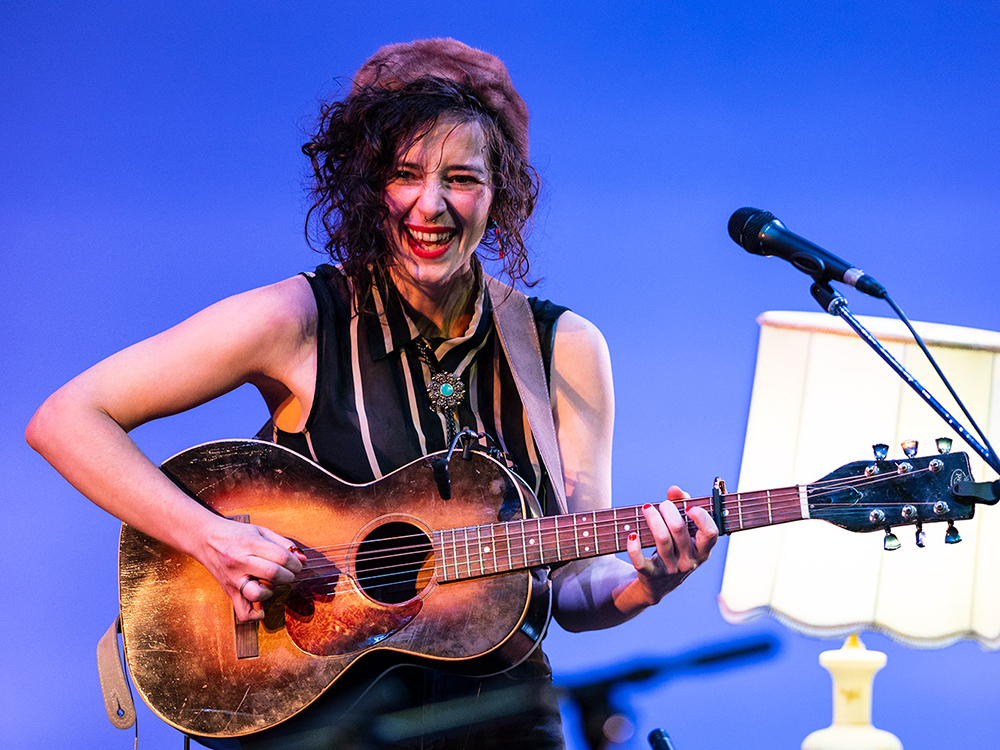 As one of three official partners for the 2022 Arctic Arts Summit, the Yukon Arts Centre (YAC) is gearing up for an intense calendar of events during the summit. We spoke with Mary Bradshaw, Director of Visual Arts at YAC, about the centre’s plans for the summit and beyond, and what kinds of things you can expect to see as a visitor.

Arctic Arts Summit: To start, can you introduce yourself and tell us about the Yukon Arts Centre?

Mary Bradshaw: I’m Mary Bradshaw, I’m the Director of Visual Arts at the Yukon Arts Center. I take care of all of the gallery and the public art engagement from this side of the organization. We have a performing arts theater of about 420 seats in the building, but myself and our co-artistic director Michelle Emslie [Director of Programming] do a lot outside of the building as well, including partnering with festivals, touring exhibitions through the territory, touring music and theater and dance—as much as we can. Our mandate is Yukon-wide, but we are physically based in Whitehorse.

We were established by an act of government, so a lot of [our services are] framed within that. We are meant to serve Yukoners in a broad range and present Yukon art—but we go beyond that. We really feel our focus is the North. Especially since our neighbors, both the Northwest Territories and Nunavut, don’t have a public art gallery. As much as we can—and it’s not always easy because, as you know, transportation across the North is difficult—but when we can we promote our circumpolar partners. We really find our audience responds so well to it, it’s so often stories that we can directly relate to and a similar lived experience. We try to be far more inclusive of the North and to showcase beyond the territory.

AAS: Working with the Arctic Arts Summit is part of that, I imagine?

MB: It was a fairly easy fit. Honestly, when we got the Yukon Government and then our partners at Adäka—we wouldn’t have done this without them. I think Charlene [Charlene Alexander, Adäka Executive Director] might be saying the same thing. We’re lucky enough to have a bit more of the infrastructure and capacity in the budget, so we can help on that end.

AAS: How did you first hear about the Arctic Arts Summit? And how did YAC come to be involved?

MB: I’ve been to both past Summits, Norway in 2017 and Finland in 2019. I was invited to the first because I’m part of the Northern Art Network, which is an association of circumpolar art museums founded by the Anchorage Art Museum. We were one of the first to join up as well, which put me on the list to attend. And it was mind blowing.

It was the first time I had been over to Northern Norway—well, Norway period. It actually blew my mind. Seeing Sámi artwork, learning about the Indigenous fishing rights and how salmon weren’t returning to the rivers—it’s exactly our story, I just couldn’t get over how much it felt like home. I was speaking with an artist, and she was saying, ‘gosh, I have a harder time explaining this to somebody from Oslo, just in southern Norway, [much closer] than I am to you, which just seems all so foreign’.

My hope is that a lot of other Yukoners get this experience of how connected we are, and how much of the shared experiences exist and can be expressed through art.

AAS: So after having that connective experience in Norway, when the opportunity presented itself again you dived in?

MB: Yes exactly. [The experience] was great, it led to a couple of Yukon artists being shown in Finland thereafter, and we’ve done exchanges as well. It’s just nice even being able to meet colleague-to-colleague in a lot of ways.

AAS: In terms of the upcoming summit, what does your role as a partner organization involve?

MB: Well, we’re helping to physically host a lot of the events. Our public gallery is about 4,000 square feet, and the GLAM collective — headed up by Heather Igloliorte — is organizing a really big collection show with emerging curators from across northern Canada.

They’ll have access to the Yukon Government’s collection, northern works from the Winnipeg Art Gallery, from the [Canada Council] Art Bank and then we have the Northwest Territories Government’s collection. And then potentially a few others—Global Affairs is interested, and so is INAC [Indigenous and Northern Affairs Canada]. These young curators are going to have the pick of everything. It’s a real celebration of Indigenous arts from across northern territories.

Most of these institutions are covering the shipping to bring the work up here because of course, that’s always a big deal, especially with where we’re located in the country. It’s super encouraging and exciting that everyone is willing to jump in with us.

AAS: I imagine this process would be really helpful for partnerships going forward and helping to connect all of these institutions?

MB: That’s just it. We haven’t actually done a formal loan agreement with the WAG before, just as one example. As far as legacy, I hope that partnerships are something we end up being able to build on too. The hope is that these folks are going to be able to see and experience and maybe be introduced to Northern artists that they’re not aware of.

“The hope is that these folks are going to be able to see and experience and maybe be introduced to Northern artists that they’re not aware of.”

AAS: Maybe it’s too soon to tell, but do you know how many artists you will be working with?

MB: We don’t know yet. I think a minimum of 25 is what we’ve got in the budget thus far. How many we can actually have depends on finding the rest of the artist fees.

In the main theater, we’re working with Yukon First Nations Culture and Tourism, who are doing this incredible Yukon Arts Showcase of Indigenous arts. And then we’re working with a lot of our other partners within the territory, like the Yukon Art Society and Yukon Artists at Work. We’re all really wanting to focus on Northern artists. We’re making sure we’re holding space even at the more informal arts exhibition spaces for shows that are coming in. We’re trying to make sure that this town is just full of art!

AAS: The elephant in the room with a big summit like this and getting huge crowds of people together these days is COVID. Have you guys had to pivot or rethink any aspects of YAC or the Arctic Arts Summit, either to provide access for people that can’t physically be there or to make social distancing allowances?

MB: I think we all are so ready to welcome back the world, right? But the territory is going through quite a hard time right now, which has given us a reality check. It’s definitely weighing on us—at the moment, even in our 400 seat theater we’re allowed to have 25 people total, which includes the cast and the crew. Basically there’s no audiences at the moment.

The maximum capacity for the summit is 400, based on our two venues at the Kwanlin Dün Cultural Centre and at the Art Center. Also just sheer numbers of hotel rooms available—we have them all, and that’s how many there are. But none of us have actually run at 400 capacity since the beginning of COVID. We’re going to do our best, but we by no means want to have the community feel that we’re creating a space that’s unsafe.

We originally had spoken about a hybrid, maybe more online. But we’re also cognizant of the level of internet across the North, and how unfair it would be if we said this is only virtual. The feeling is we’re probably not going to pivot that much to online, at least as far as the actual conference itself. We’ll see.

AAS: Is there a particular thing you’re most excited for the summit delegates to see or experience as part of this?

MB: I have to admit I’m very excited about the exhibition that we’re going to have at the center, for one, as well as the Adäka Festival, which is going to be following right after the summit. It’s just that much more open to the public. And Adäka are going to be able to utilize so many of these artists that are coming in from across Canada [and internationally]. They are going to be here on site and be able to even have more performances thereafter.

I think it comes down to the experience that I had back in Norway, individual artists and those of us who work in the arts can have those really meaningful connections. Hopefully we spark some collaborations—it’s that legacy piece. If they could spark here on site and then grow, that’s real magic.

Personally, I hope that I get introduced to a number of artists that I’ve never heard of. Since we haven’t been traveling, we haven’t been able to do that level of connections recently. Even just on an incredibly selfish note of ‘I can’t wait!’ because I’ve got programming spots where I could fit them in and I know Michelle is feeling the same too.

AAS: Are there any future plans you can tell me about now?

MB: It’s not necessarily linked to the summit, but next September, we are hosting an exhibition, Arctic Highways, with funding through Nordic Bridges, curated by Sámi artists. In the show there’s thirteen Sámi artists, two Canadian and one from Alaska, Sonia Kelliher-Combs. It’s touring through a lot of Nordic embassies and Nordic museums within the states, but we’re the only stop in Canada.

It’s wild—they have stops in Washington DC, New York, Seattle, Chicago, Minneapolis, pretty major slots, but all of the artists are like ‘no, no, if we only choose one stop it’s Whitehorse.’ They want to come North!

A number of those artists, especially the Sámi ones, have confirmed that they’re coming to the summit, which is nice. So we’ll get a chance to meet in June and then the hope is that come September we can really continue that conversation.

“Hopefully we spark some collaborations — it’s that legacy piece. If they could spark here on site and then grow, that’s real magic.”

This interview was conducted by video call in November 2021. It has been edited and condensed for clarity.

With the 10th Adäka Cultural Festival on the horizon just days after the 2022 Arctic Arts Summit, Yukon First Nations Culture…