The Story of How Johnny the Lemming Disappeared 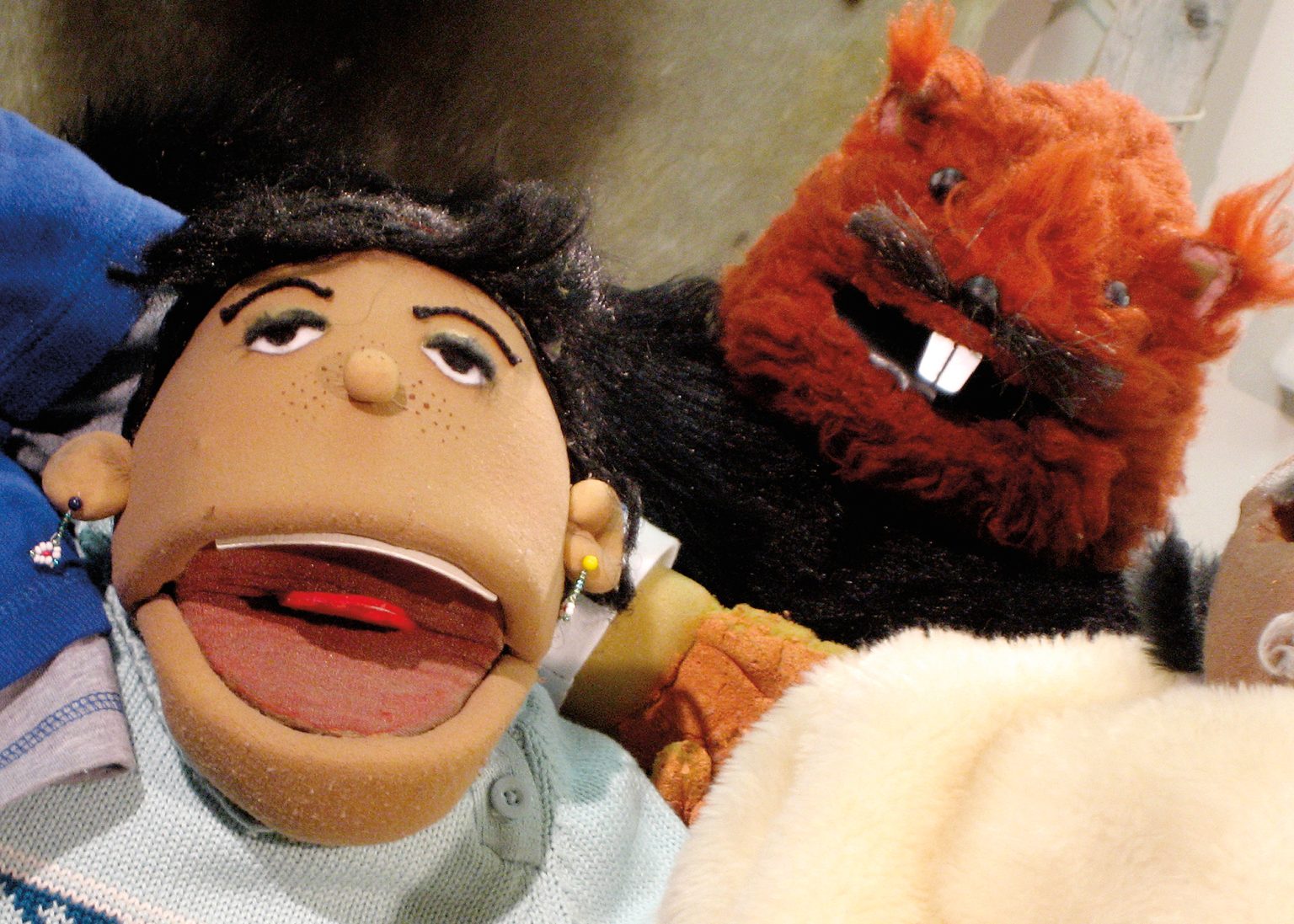 I sat on the back of a red Honda four-wheeler, both hands tightly gripping a long cord attached to a very large, inflated weather balloon. The immense pressure was yanking my arms and body upwards as I struggled to stay down, awkwardly straddling and hugging the seat with my legs. Due to traffic on the busy airport road, it was not practical to strap the cord onto the back of the Honda and so I just let it drag behind.

At that particular moment, it did not occur to me that the star of our television show might run into a bit of a problem while ensconced in a very small basket attached to the balloon, given that he was a lemming—Johnny the Lemming, to be precise.

Passersby gawked curiously as we passed. However, it was just another day of production at the Inuit Broadcasting Corporation’s (IBC) children’s program Takuginai. That blustery spring Friday morning we, the Takuginai Gang, were taping a short segment as part of an epic hot-air balloon adventure for our furry puppet cast member.

The selection of balloons available at the Northern and Arctic Ventures stores were visually unimpressive and inadequate for the task. Not having many other alternatives, I contacted the local weather station, just west of the airport, to ask if they could help, knowing that they regularly sent up high-altitude weather balloons. They were very accommodating and soon I was dictating to the technician how much air would suffice and transporting the properly inflated balloon to our studio.

Outside, the crew was ready, cameras in position. Johnny was comfortably nestled in the basket, firmly attached to the balloon, which was now anchored to the ground. It was the moment for Johnny’s hot-air balloon saga to commence.

Action! Just as the cameras rolled, wind gusts buffeted the balloon, straining the anchoring. Then the unthinkable happened: the tethers snapped, and Johnny sailed high into the sky, the balloon soaring until it disappeared amongst the clouds. Our crew watched helplessly in disbelief as our beloved lemming went up, up, upwards into the atmosphere.

The catastrophic balloon escape occurred just short of noon when we dispersed for the lunch hour. At my house the phone started ringing off the hook. Some Iqalummiut witnessed Johnny go up into space, including hunters on the beach observing the clouds, planning their routes. News of Johnny quickly spread around town, unbeknownst to me.

One of the calls was a reporter from a national broadcaster asking for an interview. I was caught off guard by the attention and his earnestness. The reporter had heard a rumour that Johnny was lost, apparently skyward in an out-of-control balloon. I jokingly mentioned that Johnny was starting a great new adventure and that he was probably on his way to Kimmirut, or thereabouts, as the balloon was now heading south.

By the weekend, aside from the gossip passed on by friends and acquaintances, I was told of accounts that young children in the South Baffin Island area communities of Iqaluit, Kimmirut, Kinngait (Cape Dorset) and even Panniqtuuq (Pangnirtung) were pleading with their parents—many of whom were members of the Canadian Rangers, part of the Canadian Armed Forces working in remote, isolated and coastal regions of Canada—to start a Johnny the Lemming search-and-rescue mission. I squirmed at that news, my father being a member of the famed group. I just knew that he was listening on CB and trail radio, as every Rangers’ search was broadcast widely within their internal pan-Arctic network.

How did it come to be that an Inuktitut-speaking rodent had become so entrenched in popular Inuk culture, and so beloved, in such a short time?

The Inuit Broadcasting Corporation (IBC) was formed in 1982 to provide news, entertainment and current affairs in Inuktitut for the Inuit audience in the Canadian Arctic. The Inuktitut television programs were hugely successful, including such live broadcasts as the IBC/NHK (Japan Broadcasting Corporation) co-production of Japan Expo ’85, which linked six countries and attracted 18 million viewers. When Inuit per capita overwhelmingly contributed to the 1984 Ethiopian famine relief effort, an Inuit delegation was invited by the Ethiopian government to visit the African country, accompanied by an IBC current-affairs crew to visit the camps, and see first-hand where their contributions were being spent.

Not only was IBC covering events around the world (I recall one of our producers hilariously relating a story, when he had travelled to Australia, of his gracious hosts seating him on a solid block of ice worried that he might fall ill or suffer heat stroke from the unaccustomed heat of the Australian outback), in addition to contributing to Inuit cultural reclamation within Inuit Nunangat, it was also providing a window for southerners and outsiders to peek into a world they were not normally exposed to.

With its successful Inuktitut programming, in 1985 IBC decided to expand its operations to create programming for children. All IBC television production training was done in-house. Southern television experts were hired to provide basic technical training when required within the larger communities where IBC stations were located. In 1985 IBC sent a pan-North call for potential producers for this new venture.

I was teaching kindergarten in Iglulik, NU when my uncle, Paul Apak, who was working as a producer for IBC, kept asking if I would consider applying for one of the positions. I was at a stage in my personal life when my situation was not ideal and thinking a change of scenery might be best. Partially to humour him, I sent in an application. Very shortly afterwards in January 1986, I was asked to come to Iqaluit for an interview. Packing one suitcase and accompanied by my young daughter, I flew to Iqaluit on a Friday and before I had a chance to really consider what I was about to embark on, I had agreed to start within the coming week.

Our training commenced at the former CBC studios, which were connected to the Brown Highrise complex. (The notorious local bar known as the Zoo was also in the complex, where incidentally I had my first-ever beer and later where the gang would meet after work to hatch some of our best script ideas.)

As we were creating live-action segments as well as learning graphics and puppetry, we were introduced to some great children’s television experts including the Fraggle Rock puppeteers, Polka Dot Door writers and we got to see Mr. Dressup’s set.

We worked extremely hard at creating three pilot programs, which when completed, Seemie, Solomon and I took to different communities for focus group testing. I was in Salluit when one of the audience members, a local hunter, stated that he was impressed but advised that we should take care not to create characters of animals that we harvested and ate. His logic being that Inuit used such animals as food, and that our programming, unlike Western television, should not influence young children into thinking otherwise. Taking his advice to heart, Leetia and I set about creating puppets that would fit the bill.

Our superb camera expert was a grumpy older ex-CBC employee named John, whom I often butted heads with. In his honour I decided it was a good name to bestow on a character. Hence Johnny the Lemming and the whole puppet family came into existence!

In October 1986 we launched our first-ever public broadcast. We had to produce 30-minute segments to air Monday to Friday, which was a tall order indeed. Creating everything from scratch with limited resources and a lack of trained cast was a highly stressful but very fulfilling endeavour. However, our gang had not fully realized what effect our program was having on our audiences until the fateful day, almost two years later, we lost Johnny. When the balloon escaped, we had not had an inkling as to what the reaction from the public would be.

Due to the immense publicity that followed, we were suddenly scrambling to rewrite scripts to satisfy Johnny’s thousands of fans. We did not have a replacement puppet (we made them all by hand), but thankfully we found enough material to eventually replace our lost lemming.

I did hear afterwards that many hunters and parents of anxious children had set out on a major lemming hunt, but to no avail. Although Johnny 2.0 continued with his adventures, I have a feeling my original Johnny is out and about on Baffin Island somewhere enjoying his freedom! I will forever be grateful for the happiness and joy he gave not just myself but many other Inuit, adults included.

He was never just a puppet in my eyes and heart; he was a dear friend who taught me so much as we went through his adventures together. Thank you, dear Johnny.

Blandina Attaarjuaq Makkik, originally from Igloolik, NU, is the Igloo Tag Trademark Coordinator for the Inuit Art Foundation. For over a decade she managed the Inuit and Native Gallery of the Guild Shop in Toronto. She has also worked extensively in the field of film and television.

Credit:  This article was originally published in the Fall 2021 issue of the Inuit Art Quarterly. Copyright the Inuit Art Foundation.

This story is part of the Nunavut Spotlight. View more content from the Spotlight here.