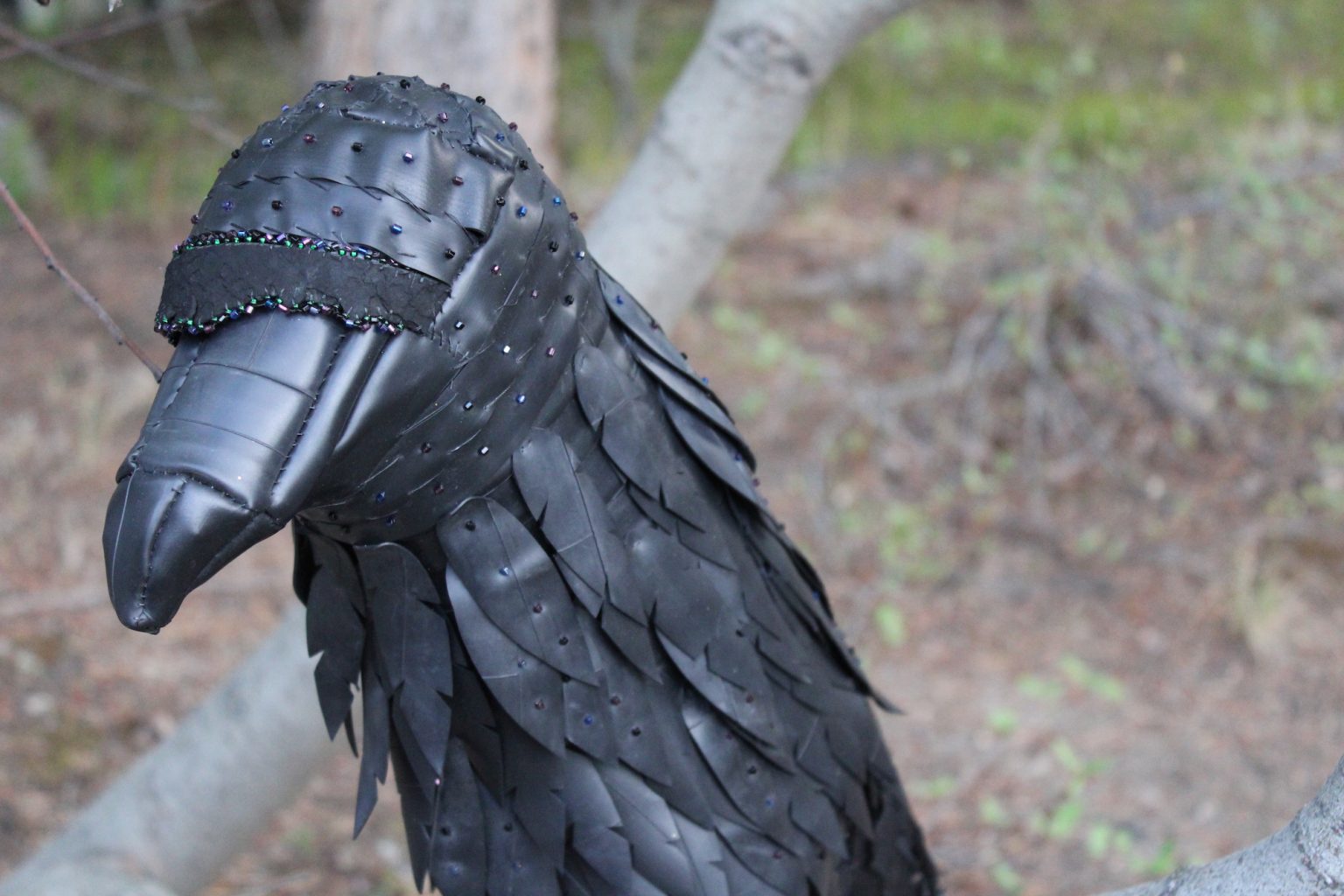 Teresa Vander Meer-Chassé is of the Niisüü clan from White River First Nation in Tthèe tsa’ niik (also known as Beaver Creek) on what is now the Yukon/Alaska border.

“I first and foremost consider myself a beadwork artist. That’s where everything started. My Grandma taught me when I was eight [years old.] She gave me my first beads and needle and thread. It started with beads. That’s where everything came from. Now, I work in natural materials as well. Diving into processing my own backstrap sinew, collecting my own porcupine quills, I just started my first moose hide.”

When Teresa began learning beadwork, she went straight to the source. “There was no YouTube, or anything like that. It was my Grandma sitting me down, giving me the supplies, and I watched her. She would tell me what was right and what was wrong. That’s how I’ve continued making it work, was this practice, and watching other people do it, and starting to build off that.”

These early teachings from her matriarch are reflected in Teresa’s work, braided with the realities of the modern political landscape for Yukon Indigenous people.

“I have materials that represent certain things to me. Some people can interpret that, and some people can’t, so then I add story to it through writing about it, through talking about my works. And it all relates to the politics.”

When colonization came to the far north of the continent, it brought down a border between two new countries with little to no concern for the inhabitants of the land, and the Upper Tanana people were split by the American/Canadian border. “A lot of my family members are in Alaska more than in the Yukon. We are the only Upper Tanana family that ended up being in Canada. There are a lot of issues there with an international border.”

The White River First Nation is one of three First Nations in Yukon who have not signed the Umbrella Final Agreement.

“We are in many ways the underdog. It’s a constant battle to get our voice heard. It’s ongoing and it’s in the art community as well. It’s like White River is kind of forgotten about. White River is small. White River is more connected to Alaska. White River is unsigned. We are either an interruption or a disruption in other people’s lives. We are too quiet, so then we have to yell, and we have to fight for our position.”

“Whether agreements are signed or not, they do not define a community or a First Nation at all.”

Part of what does define community is language. Teresa started her language reclamation journey taking lessons through her cousin, Jolenda Johnny. “It’s been important to me to start naming my pieces, the art that I create, Upper Tanana words—even thinking about the stories we have, and incorporating them.”

As a curator, Teresa is always taking into consideration the representation, value and meaning of Indigenous artwork and the importance of space.

“Even just thinking about Indigenous Art in a gallery space is new. That hasn’t been around for very long, that people have been recognized as more than the artifacts that they put in cabinets of curiosities in museums. Actually thinking of us as fine artists is an extremely new concept for the world. Being accepted into those spaces. Making spaces of our own though is also important. Indigenous-run centres are very important.”

“In the Yukon, it’s starting to get better. I think there has been an appreciation for Indigenous art in the Yukon for a while, but it’s gotten to a level of marketing Indigenous art for what it’s actually worth. That was a big thing in the last decade or so that we’ve been struggling with. I shouldn’t be able to buy a pair of moccasins for 80 bucks. That’s ridiculous. I think we’re starting to see Indigenous artists understanding that their work has incredible value, that the work that their Mom or Grandma taught them to do, the patterns they come up with, it’s all extremely valuable. When it comes to the greater North American arts scene, or even here in so-called Canada, we are still falling into certain categories. When I say ‘beadwork,’ people instantly think ‘moccasins.’ I have to tell them that I’ve actually never made a pair of moccasins. That’s not my type of beadwork. I’m sure I’ll make them someday.”

It is a balancing act to create Indigenous art space as well as being recognized in the mainstream art space. One of the challenges Indigenous artists face is having work exhibited in non-Indigenous spaces. “All of the spaces I’ve been exhibited have all been Indigenous-themed spaces. I’ve not yet been shown in spaces not specifically for Indigenous artists. Why? Is my work ‘too native?’ I’ve been told that it is.”

“I don’t want to satisfy just those spaces. I don’t want to make work that people find comfortable. If they don’t, they don’t. I make work for my family. When I write about my work, I write it so my Grandma understands. As long as they get it, I don’t have to worry about anyone else.”

These historic barriers and challenges occupy the thoughts of the artist as she expands her arts education through the MA program at Concordia University in Montreal.

“This is my first time studying art in a post-secondary world. It’s different, but I feel like I’ve had enough time with my own art practice that I have the confidence of going in and moulding the master’s program to myself instead of trying to fit them.”

I have no understanding of European art history outside of the pop-culture references we all get. My art history is Yukon Indigenous. That’s the other side of it. We are not all educated in European art history. And that’s good. We should be thinking about what we know, and knowing the differences between crow boots in Old Crow, and crow boots in NWT. That is our art history. It’s worth having the knowledge and holding it and using it. Especially if you are studying art.”

Teresa lives part-time between Victoria and Beaver Creek with her partner Chris. She is studying art at Concordia University in Montreal through distance education that also brings her east.