Project Spotlight: A panel discussion from industry leaders on storytelling, career development, and making art about Invuialuit culture and identity. 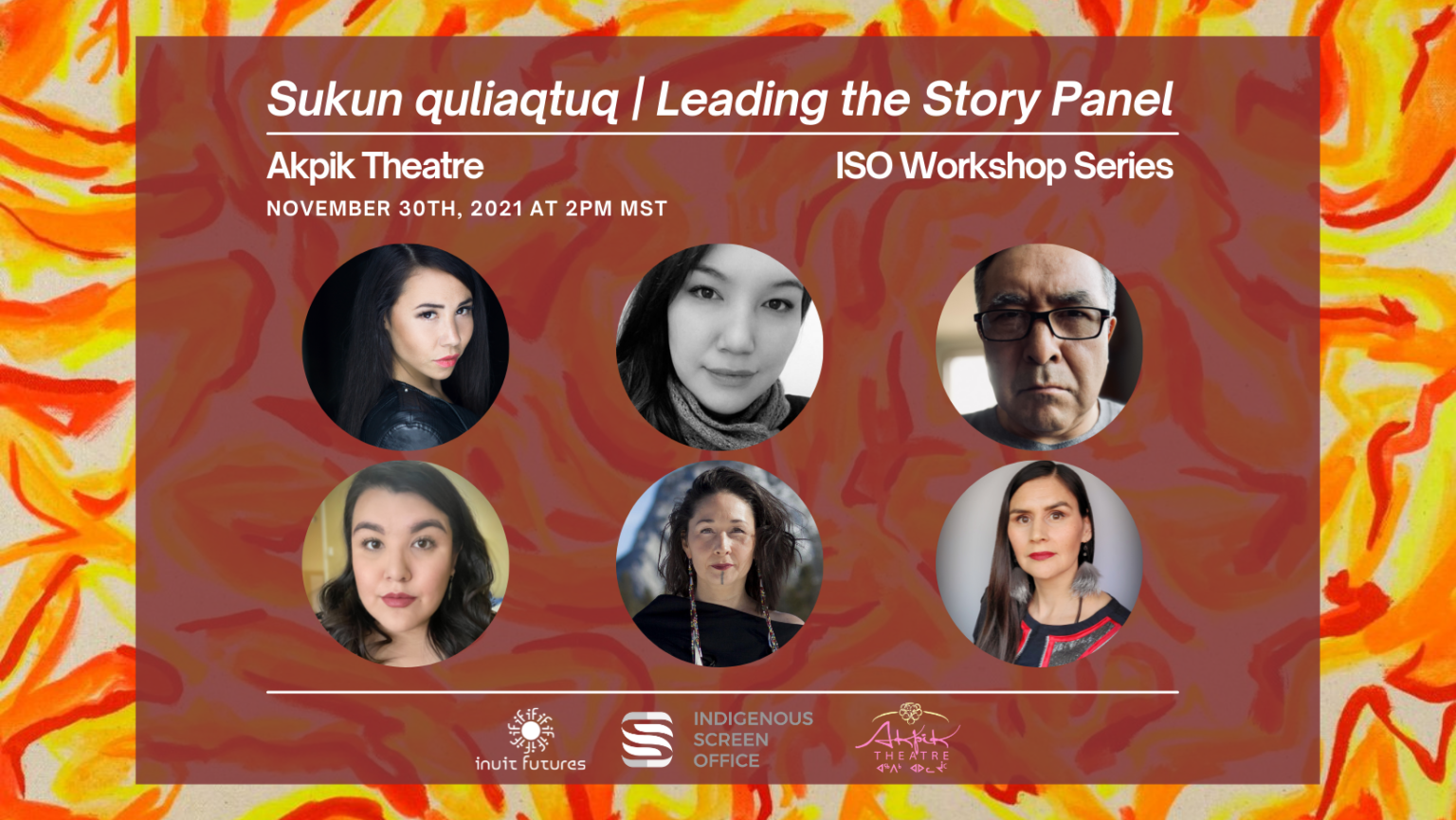 This panel was offered as part of a series of online workshops organized by Inuit Futures in collaboration with the Indigenous Screen Office as a way for our community to gather and connect with artists in film, video and graphic design, and to learn about their practices. This series of workshops featured Inuit film, video and screen professionals from around the country who shared valuable professional and creative skills and knowledge with other Inuit and Indigenous attendees, creating a sense of community and connection for all who participated.

The panel featured a line-up of industry professionals who delved into how their medium of choice engages language and culture. They discussed the values they bring to their work as Inuvialuit and what compels them to create, and discussed what it means to make art about Inuvialuit culture and identity. They also spoke about how creative careers lend well to exploring personal stories, and shared the outcome of using storytelling on their online platforms to create positive change in their communities. This free zoom  panel was followed by a 30 minute Q&A.

More workshops in the Indigenous Screen Office series were offered by Inuit Futures through to February 2022.

Taalrumiq | Christina King is an Inuvialuk artist & designer from Tuktuyaaqtuuq, Inuvialuit Settlement Region. She graduated from the University of Alberta where she earned a Bachelor of Science in Human Ecology degree and a Bachelor of Education degree in Secondary Education, majoring in Career & Technology Studies (Home Economics) and minoring in Art. Her sealskin pandemic mask set titled Inuvialuit Fortitude is on tour across Canada with the Breathe. exhibit. Taalrumiq is currently a mentor artist with the Strong People Strong Communities Mural Project on the Healthy Strong Elders Team, with the mural scheduled for completion in Yellowknife in summer 2021.

Jerri Thrasher was born in Inuvik, NT, but spent most of her teen years in Paulatuk, NT, where her passion for capturing Inuvialuit life through photography and film started. Thrasher moved back to Inuvik, NT to pursue work in the film and TV industry. She made her directorial debut in 2017 with The Last Walk and currently works as a television producer in Inuvik.

Dennis Allen is an Inuvialuit film maker from Inuvik, Northwest Territories. He is a graduate of the Southern Alberta Institute of Technology’s Cinema, Television, Stage, and Radio Arts program. He has worked on the CBC series North of 60 as an editing intern and actor, the National Film Board of Canada’s feature length film The Herd as a production associate and actor and as a director of photography for Discovery Channel Canada’s “Season of the Arctic Red,” the Heritage River Series. He currently resides in Yellowknife, Northwest Territories and works as a freelance producer specializing in cultural programming.

Marika Sila is an Inuit actress from Yellowknife, NT. She is best known for her work on the popular TV series The Twilight Zone where she played the lead role as Sergeant Yuka Mongoyak, the first female Inuit police officer to attain the rank of sergeant in the state of Alaska. Marika also specializes in stunts and special skills including hoop dancing, fire spinning and sword and staff handling. She started her special skills journey as a hoop dancer, and was recently voted Canadian Hoop Dancer of the Year. She is co-founder of RedPath Talent and has travelled across Canada, the U.S and Europe performing and hosting youth empowerment programs raising awareness about the power of sobriety, anti-bullying, and mental health. Marika is currently filming a TV series called Tribal, and is focusing on expanding RedPath Empowerment projects to schools and communities across Canada.

Inuvialuk from Inuvik, Northwest Territories, Tamara Voudrach is a mother and media professional working in the arts sector. As the manager of the Inuvialuit Communications Society, she is passionate about preserving and promoting Inuvialuit language and culture, and strives to provide opportunities and mentorship for youth to gain skills and experience working in the arts sector.

Reneltta Arluk is an actor, writer, director and producer of Inuvialuit, Dene and Cree descent from the Northwest Territories. Presently the Director of Indigenous Arts at the Banff Centre for Arts and Creativity, Reneltta has been active in Indigenous theatre productions across Canada and internationally for over a decade. She is the founder and Artistic Director of Akpik Theatre, a northern theatre company that develops northern and Indigenous stories into professional stage productions. Reneltta joined Inuit Futures in Arts Leadership in 2017 to represent theatre and serve as a voice from the Western Arctic within the Inuit Leadership Group. She is currently in the process of planning a project with the National Arts Centre.

Credit: This video was originally published by Inuit Futures in Arts Leadership, in partnership with the Indigenous Screen Office and Akpik Theatre on January 12, 2022. COURTESY INUIT FUTURES IN ARTS LEADERSHIP: THE PILIMMAKSARNIQ/PIJARIUQSARNIQ PROJECT.

This story is part of the Inuit Futures in Arts Leadership: The Pilimmaksarniq/Pijariuqsarniq Project Spotlight. View more content from the Spotlight here.