Project Spotlight: Learn about a new short film on the return of the Inuit drum to Labrador. 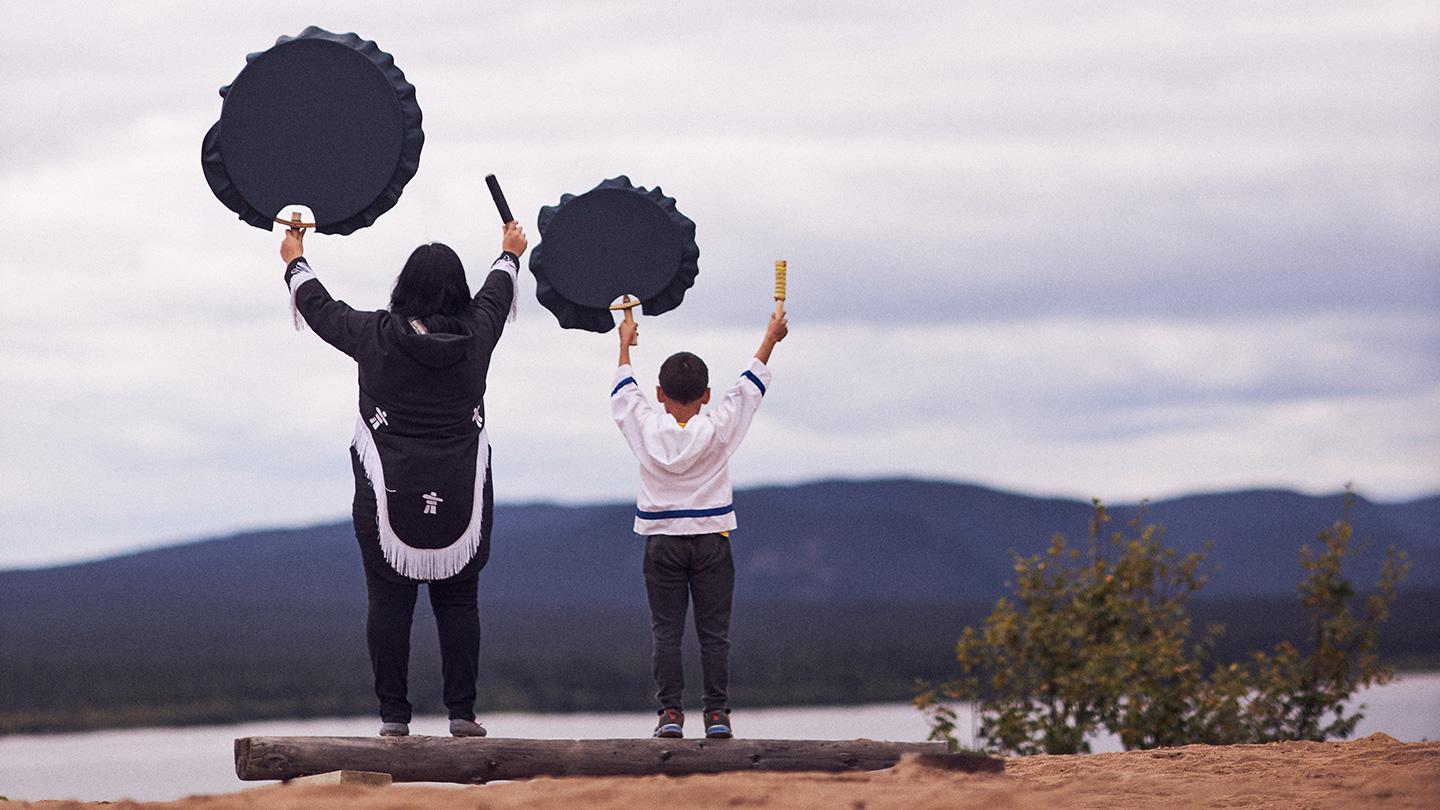 An adventurous young boy and his determined mother share a passion for Inuit drum dancing in Happy Valley-Goose Bay. Evan’s Drum is a joyful visit to a family’s loving home, and an uplifting story of cultural pride. After generations of silence, the rhythm of the traditional Inuit drum has returned to Labrador, and seven-year-old Evan is part of the new generation that will keep its heartbeat strong.

Evan's Drum, Ossie Michelin, provided by the National Film Board of Canada

Evan’s Drum is the story of an adventurous seven-year-old boy from Happy Valley-Goose Bay, NL. Evan is part of a new generation of Labrador Inuit who are among the first in living memory to grow up with the sounds of drum dancing since birth. In this film, we follow him and his mother, Amy, as she teaches Evan how to drum dance, and together with drum maker Jennie Williams, they make Evan his very own drum.

When I was a child growing up in Labrador, I never heard the sound of traditional Inuit drum dancing. It wasn’t until I was a young adult that I heard the rhythmic beat of the drum and witnessed the fluid movement of the drum dancers. Due to centuries of colonization, the tradition of drum dancing was lost to Labrador. When the drum returned in the early 21st century, it brought with it a revival in Inuit culture and pride. Now, during our opening events and ceremonies in Labrador, it is common to see a group of drum dancers of all ages performing and celebrating.

What always amazes me is to watch the drum dancer transform as they play their instrument. Their posture changes and their movements slow, their smiles grow bigger, and the look of pride and determination in their eyes shines bright as they coordinate their movements, playing together as one. There’s a beautiful joy in watching a drum dance—a joy that resonates with everyone watching. It was this sentiment that brought me to this story; it was something that I knew I wanted to share with the world.

In 2018, I was working with the Newfoundland and Labrador Residential School Healing and Commemoration project to record the testimonies of residential school survivors and former students. Before each of our sessions, we would hold a community feast to honour those who attended residential school with speeches and performances from the local community. While at the session in my hometown of North West River, Amy Winters and the local group of drum dancers from Goose Bay performed. Over the years, I had watched this group performing around the area, ever since they used to be the youth drum group.

As Amy approached the front of the room to perform, we saw a small figure run to her, holding above his head a drum nearly as large as his entire body. He handed his mom her drum and hugged her leg, and then sat in the front as she drummed, completely transfixed. When the drum dancers were finished, he ran over to his mom again and she bent down as he whispered something into her ear. Amy asked the crowd, “Is it OK if my boy Evan drums along with me to a song?” To which everyone agreed: “Yes, of course!”

At that moment, as Evan played his way-too-big drum with his mom, I saw the look of pride on his face, and mirrored back in his mother’s expression. As I looked around the room, I saw everyone smiling; that same look of pride had spread to every person. When it was all over, we gave the two a standing ovation.

A few months later, when I heard the call for the NFB’s Labrador Doc Project, I instantly thought of Amy and her little boy, Evan. I reached out to Amy to see if she would be interested in making a film, and she was thrilled. All through the production it was my goal to not just make a film that shows life in Labrador, but to make sure that Amy and Evan had a wonderful and memorable experience.

The Labrador Doc Project is so important because it provides a chance for Labrador Inuit to tell our own stories and share what is important to us. For too long we have had to rely on others to tell our stories beyond our region. While there’s nothing inherently wrong with this, there’s just something special about hearing stories directly from the people who know them best. While making this film, I worked to make it as recognizable as possible for everyone in Labrador, so that they could see their home and themselves reflected.

During the production of Evan’s Drum, I kept thinking how the four films in the Labrador Doc Project—made by me, Jennie Williams, Heather Campbell and Holly Andersen—will be such valuable resources for schools in Labrador. Students will grow up through the school system watching these films and seeing their homes, cultures and sometimes even friends and family on the screen. I truly hope that the Labrador Doc Project inspires young people in Labrador and helps them to see that not only are their stories worth telling, but that they too have the power to share their stories with the world.

It’s January 6 and the temperature is falling below -40 °C. From the dark of the Nunatsiavut night, the Nalujuit appear on the eastern sea ice. They walk on two legs, yet their…