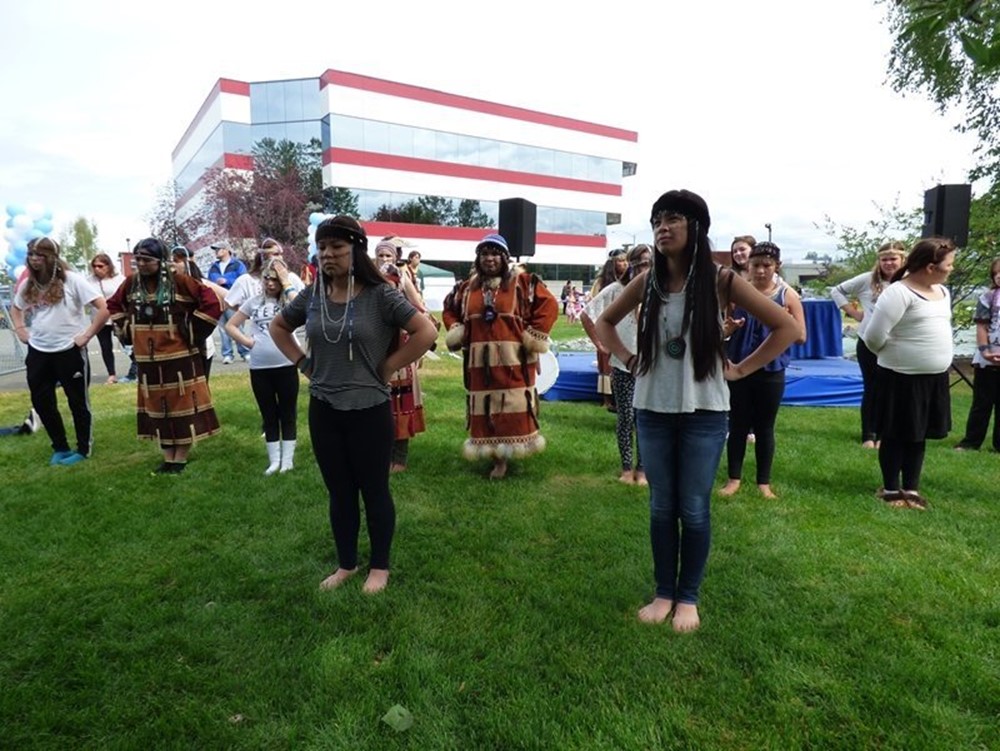 A culture camp in Anchorage creates opportunities to learn Unangax̂ language and lifeways.

Alaska Natives have faced social and cultural disruptions that include epidemics, dislocations, language loss and boarding schools. One way communities in Alaska perpetuate and restore their cultural heritage is through culture camps. The need for these opportunities has grown greater as Elders—experts in language and customary practices—pass away. Culture camps are not simply about the past, they are growing opportunities  withfor Indigenous teaching and learning—connecting youth, knowledge-keepers and Elders with dance, language, and subsistence, and with making tools, regalia and more. They are a way for Alaska Native communities and organizations to offer meaningful access to cultural heritage and to continue the passing on of knowledge.

For nearly fifteen years, the Aleutian Pribilof Islands Association, Inc. (APIA) has provided the Urban Unangax̂ Culture Camp in Anchorage, Alaska, where many people of Unangax̂ descent reside. The Camp provides opportunities for youth and adults to learn about the Unangax̂ (Aleut) culture through customary practices, enriching the lives of those who participate. There is a focus on understanding what it means to be Unangax̂ and for students to find their own sense of Native identity.

The Urban Unangax̂ Culture Camp culture camp is offered the third week in June at the Unangam Ulaa (the Home of the Unangax̂) at APIA’s central headquarters, where Darling Anderson is the Cultural Heritage Coordinator. “My mom, she had six daughters and always made sure we knew where we came from,” Anderson said. Her mother grew up in False Pass and later moved to Anchorage. Anderson’s Unangax̂ name is Chngatux̂, and she lives and works in Anchorage, on Dena’ina homelands. She grew-up in Anchorage but spent summers in False Pass subsistence fishing and gathering.

“I am a Millennial, and my generation did not have many opportunities like culture camps,” Anderson shared. “Even when I was in high school, I knew some Native kids would pretend to be Hispanic or Asian. Fortunately, my little sisters grew up with culture camp experiences. It’s amazing to see all these kids today who are so proud to be Native. My mother was always so adamant about telling us about our culture and ancestors. She would give us books and share all these stories about Unangax̂ culture.”

The Indigenous term for the Unangax̂ language is Unangam Tunuu. It is estimated there are fewer than 90 Unangax̂ language speakers, and as a young adult Anderson decided to learn her language. Alaska Natives have survived attempts to suppress and extinguish their languages and cultures, and this affects generations today. Thankfully there are programs like the Urban Unangax̂ Culture Camp that provide opportunities for people who want to learn their Native language and lifeways. “Elders can come in at any time and teach whatever they want during the culture camps,” Anderson said. “We encourage them to be involved, and they always want to participate.”

APIA is dedicated to offering language and cultural heritage activities that are free of charge and accessible to everyone, and they develop programs with a different approach to learning compared to Western practices. “Native teaching styles are more about watching and listening, and then you try it,” Anderson said. In 2019, the Culture Camp had 239 participants, the most since camps began in 2008. Students learn arts and country food, all with an Unangam Tunuu component, including dancing and how to make drums, kayaks, jewelry and bentwood visors. Beyond learning, participants experience belonging and friendship within the Unangax̂ community.

Richard Perry from Anchorage, Alaska, is Yup’ik and Gwich’in. He is a writer, journalist and photographer with a BA in Philosophy, Applied Ethics. He has regularly published articles and photos in Indian Country Today, First Alaskans magazine, and Alaska Business Monthly. In 2016, Perry completed a month-long artist residency at the Tyrone Guthrie Centre in Ireland. More recently, he has written a graphic novel called the Wildmen of Denali, which is currently in the process of being illustrated.

This story is part of the Alaska Spotlight. View more content from the Spotlight here.

In a conversation moderated by writer Emily Henderson, participants Theresie Tungilik (artist and advisor for the Government of Nunavut in the department of Arts &…