Project Spotlight: A pinhole photograph by the renowned Kalaaleq and Danish artist in the Nuuk Art Museum collection visualizes the ocean as connective tissue between territories. 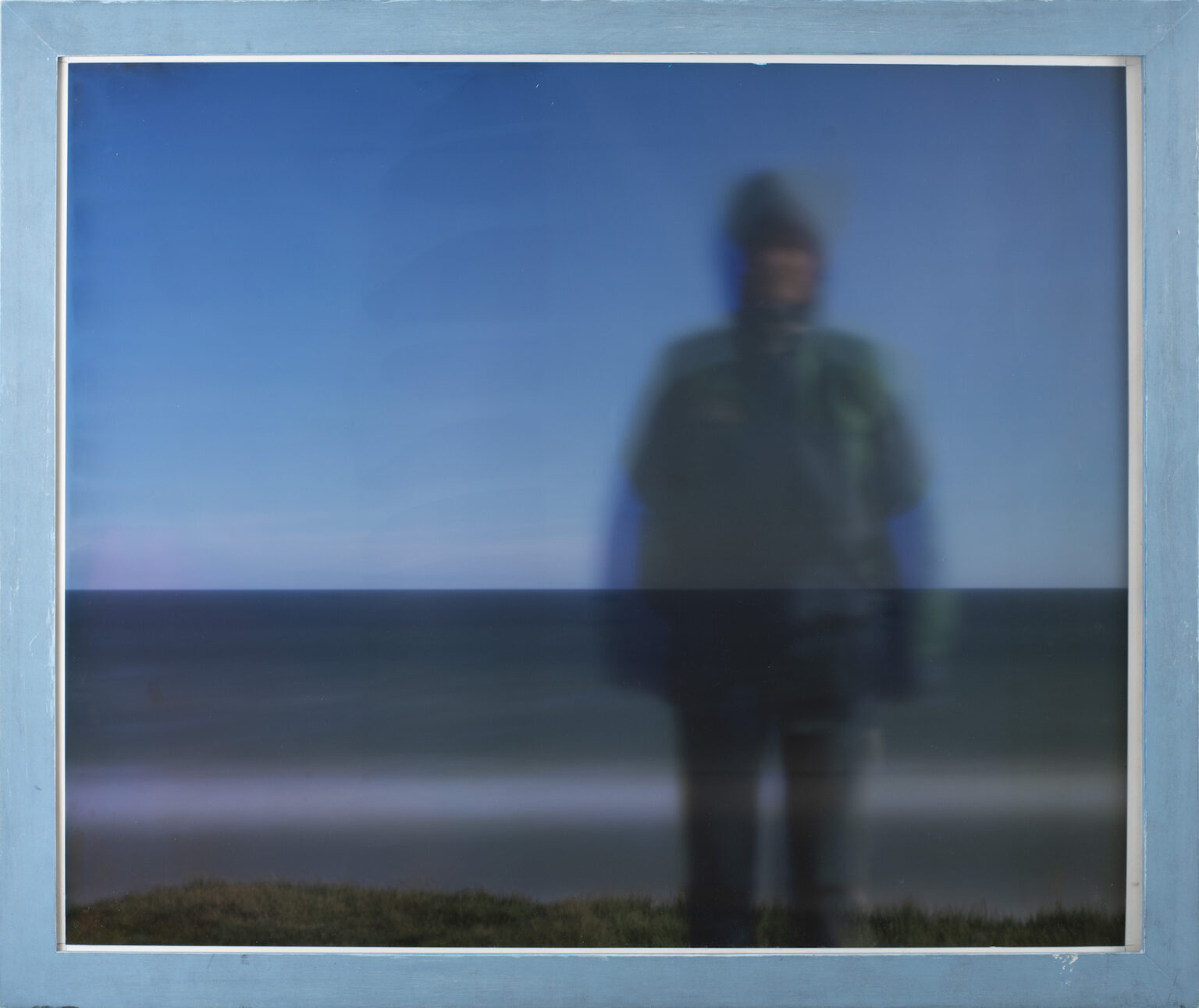 In 1996, Pia Arke took some photographs with a pinhole camera at Lønstrup Cliff in North Jutland, Denmark. That resulted in a series of nine photographs, one of which, titled The Art Historian,[1] has been acquired by Nuuk Art Museum.

A human figure stands in the landscape,. blurry and transparent, yet clear enough for us to see that she isn wrapped in a raincoat with a hood. The figure is most likely Pia Arke herself, as she habitually used herself in her photographic works. She dissolves into the landscape, the landscape dissolves in her. Her back turned to the sea, she stands on grass on a cliff edge, the horizon cutting through her as it runs between the blue of the ocean and that of the sky.

The photograph spans from the darker and bluish violet tints of the ocean, to the lighter and greenish ones of the grass and the raincoat; but the overall colour is blue—even the frame is painted light blue.

Pia Arke started experimenting with the pinhole camera in 1988. A pinhole camera has no lens, only a small hole which is uncovered when taking a photograph. The light passes through the hole and falls on photographic film on the opposite side. Pia Arke built a pinhole camera so big that she could sit inside it; the film too was so large that it had to be developed in a bathtub. Taking a photograph with this sort of camera required at least 15 minutes. The slowness of the process allowed Pia Arke to move in and out of the photograph, and thus let a subject appear more or less clearly, as is the case for The Art Historian. It all came down to standing in front of the camera only for part of the exposure time.

Pia Arke took her human-sized pinhole camera along to Nuugaarsuk near Narsaq (1990), Kronborg Castle in North Zealand (1996), and Lønstrup Cliff in North Jutland (1996). All places connected both with Pia Arke’s personal history and with the relationship between Denmark and Greenland. There, some 3000 km away beyond the line of the horizon, is Greenland.

The blue piece The Art Historian tells us nothing about Denmark, the country on whose edge she stands—not about Greenland, the country behind the horizon. They both remain outside the photograph’s framing. Yet they are bound together in a very singular way by the blue colour and the figure in the picture. The ocean connects more than it divides—with its longings, its sailing routes, its boundlessness and its blue tints.

Notes
[1] Sometimes artworks do not only change owner, but even their title. Nuuk Art Museum purchased this work as Blue, a title which turned out to have been given to it in between the previous owners and us. By whom and why, we do not know. The correct title is The Art Historian, as the work is called in the book Tupilakosaurus and in the extensive research carried out by Kuratorisk Aktion up until and following the exhibition Tupilakosaurus— – Pia Arke’s Issue with Art, Ethnicity, and Colonialism, 1981–2006.

Credit: This article was originally published by the Nuuk Art Museum as part of their “Behind the Art” series. COURTESY NUUK ART MUSEUM.