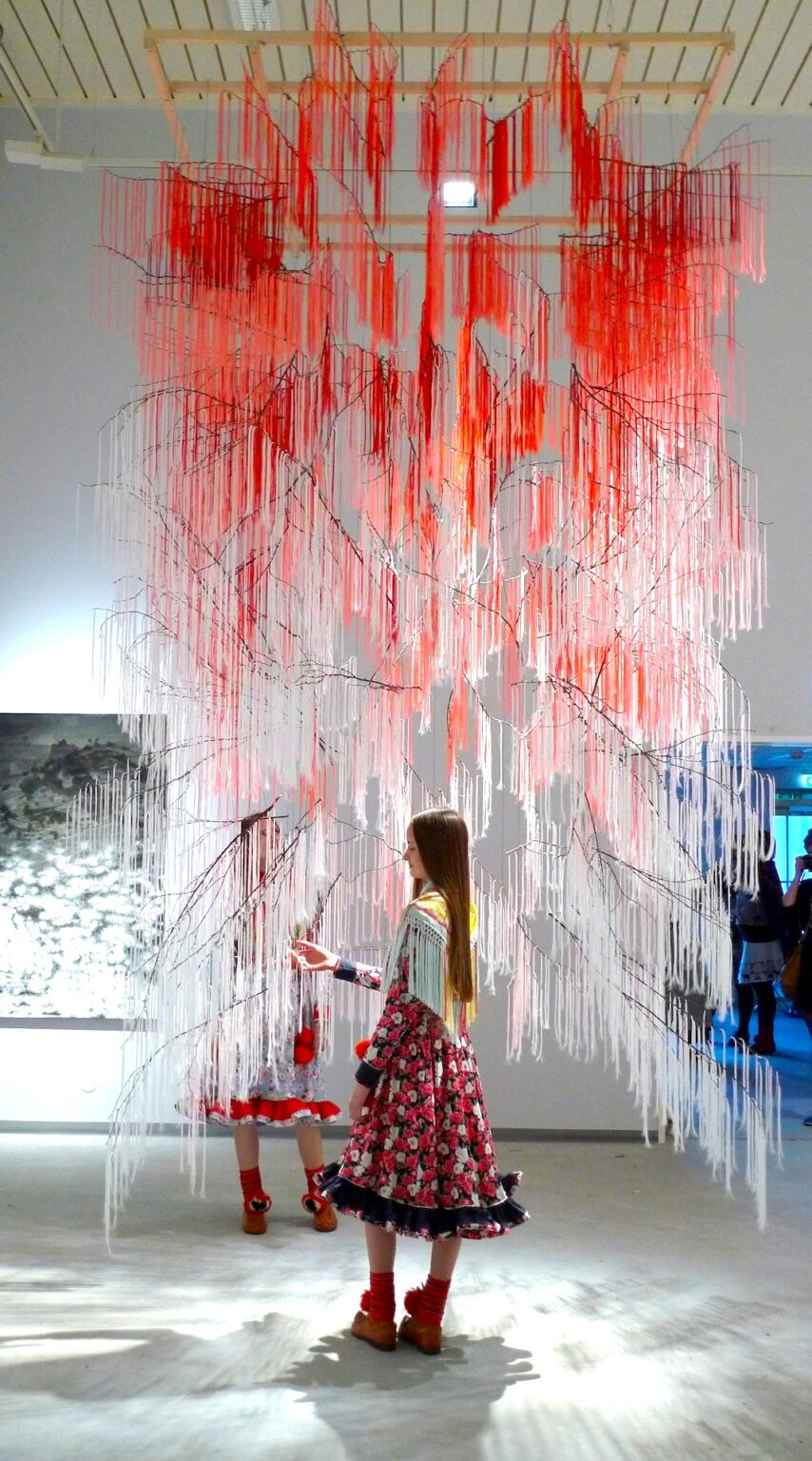 Outi Pieski is a Sámi artist and activist from Finland, where she lives in Ohcejohka (Utsjoki) and Numminen. Working primarily in painting, collage and installation, Pieski uses art to explore how our relationships with nature can play a part in protecting the environment from invasive development—infrastructure such as trains and pipelines—as well as other encroachment on the landscape. She also incorporates elements of traditional Sámi clothing and tools to reflect on the impacts of Scandinavian colonialism on Sámi matriarchal society, history and identity.

Elements of traditional Sámi clothing such as tassels and horned hats figure prominently in Pieski’s art, while the light and colour of Sápmi’s natural landscapes are also paid special attention. Pieski explains the significance of natural elements in her piece Halo (2012-2013): “the work consists of birch branches and the Sámi shawl fringe tied to them, forming a transparent spatial entity. In this installation, the person can enter inside and become the tree trunk itself, surrounded by the aura of the foliage of the tree. Working by hand and the simple repetition is an important part of the installation. The practice is ritual, sacrifice, atonement, and renunciation. Those who walk in the fell know that where there is birch, there is also safety. It means head and light. When you come near birch you enter into its atmosphere.”

Returning to her roots on traditional Sámi lands as an adult is reflected in her art practice, which often gives a sense of having been lost and returning home again. This kind of collective yearning spans across the circumpolar world from Sámi people to urban Inuit, conveying a universality among those who long to connect with their culture regardless of place.

Pieski has also dedicated much of her practice to the topic of feminism in Sámi culture and the deliberate breakdown of women’s rights through Scandinavian colonization. Her use of traditional clothing and the changing forms of Sámi horn hats in her work at the Tamarind Institute are just one example of how she uses her art to express feminist activism.

Credit: This video was originally published by the Tamarind Institute on February 18, 2021. COURTESY THE TAMARIND INSTITUTE.

Connection to the Land