Artist Project: Behind-the-scenes interview with the Nunavut director on her feature-length thriller. 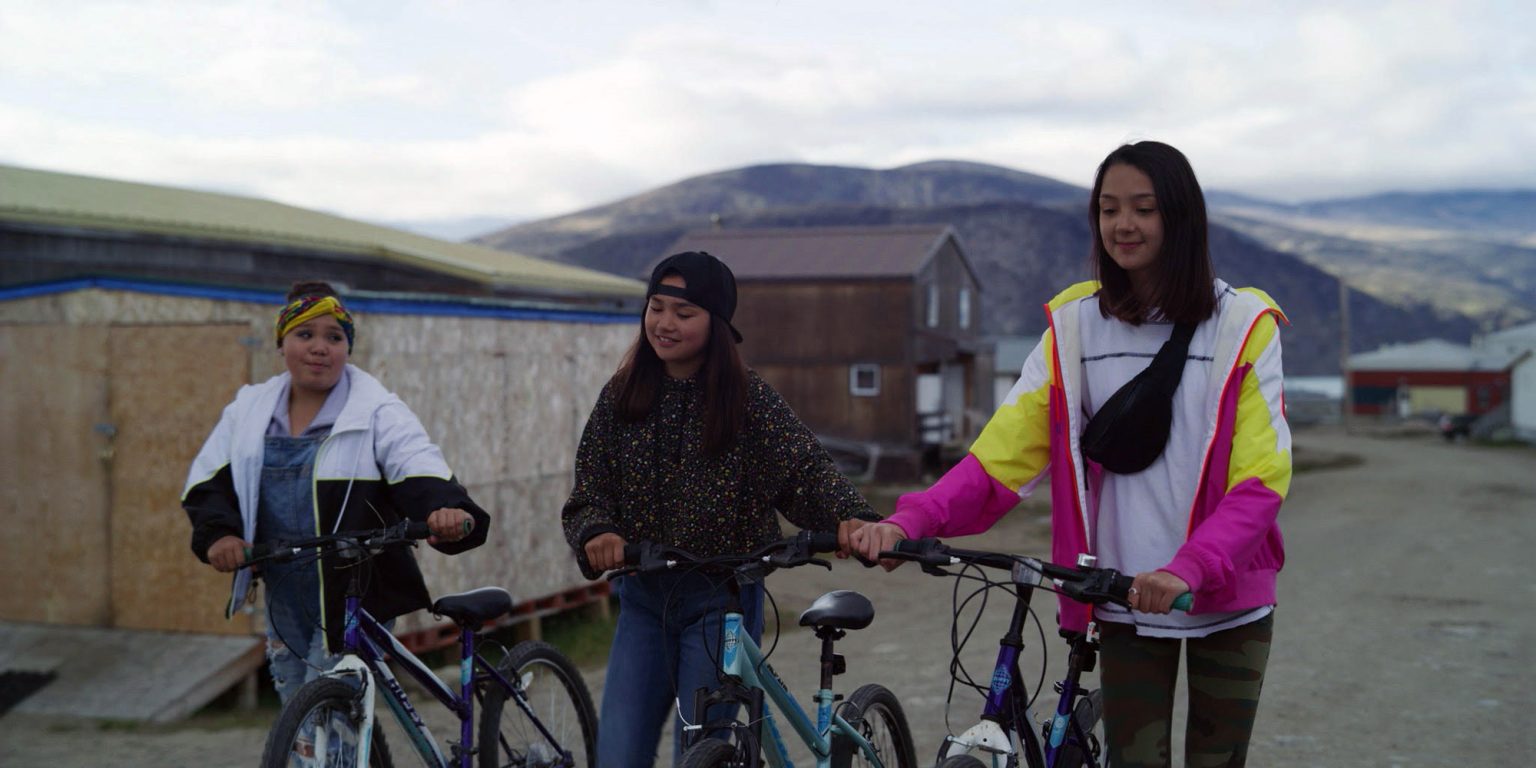 After more than three years in production, the long-awaited thriller Slash/Back has finally premiered! Directed by Nyla Innuksuk and starring Tasiana Shirley, Alexis Wolf, Chelsea Prusky, Frankie Vincent-Wolfe and Nalajoss Ellsworth, the film centres around a group of pre-teen girls who fight off an alien invasion in the remote Arctic community of Panniqtuuq (Pangnirtung), NU. Jessica MacDonald spoke with Innuksuk about the genesis for the film and the unique challenges posed by casting and filming on location in the Arctic during 24-hour daylight.

Jessica MacDonald: Can we talk about how you got started making movies?

Nyla Innuksuk: I started making movies when I was a kid. I grew up obsessed with movies, horror movies. When I was in high school my brother got a camcorder after he broke his leg. I ended up using that camera, and me and my friends used to make movies when we were in high school. Then I went to film school at Ryerson here in Toronto, ON.

JM: You’ve made several short films, but this was your first time directing a feature-length movie. Why Slash/Back?

NI: My mom gave me the request to make the scariest movie she’s ever seen! [Laughs]

JM: Your mom asked you to make the scariest movie you could—that’s the inspiration behind Slash/Back?

NI: It’s more of a coming-of-age, horror/sci-fi—kind of melting of all of the genres, but she definitely had some core influence for sure. In the end, it is a very personal project about what it means to be growing up in a contemporary world as an Indigenous woman. We are the children of residential school survivors dealing with shame in our identities [as Indigenous people]. And dealing with our identities as young women. But of course I had to throw some aliens in there to make it fun.

Just to get to the point where you can be taking on and directing a feature, being up there at a certain point [during filming] in Pang, in the beautiful community where we shot and walking around, at a certain point I was like, ‘Oh, wow, I’m actually doing this thing!’

I was working with a bunch of 14-year-old girls and thinking about myself at that age, and just how much I loved horror movies. For me to be up there, I was really doing what I wanted to do when I was a kid.

JM: I understand that your casting process for your young actors and actresses was done in a bit of an unusual way—you had acting workshops?

NI: Our casting was done a little uniquely, mostly just because [casting] doesn’t usually happen in the Arctic, so going about casting in a traditional way wouldn’t work. And for me, I had no money when I started casting. I went up to Iqaluit, NU, which is where my family lives, and I stayed with my parents and did workshops and castings from there, making a short-film concept before I made the movie.

A big part of my work is capacity building in the Arctic, mentorship and training in workshops to build up the capacity in the Arctic so that there’s other people that are making stuff there. So when it came to casting for this project, going through that same workshop model just made sense. It meant that when we had youths taking part, they could be getting a chance to learn new skills. They’re all getting something out of the experience, even if they don’t get a part. And especially if you’re working with girls that are between the ages of 11 and 14, it’s important to make sure that the whole experience is fun.

The first weekend that I did acting workshops, I got such an amazing turnout. I had an Inuk actor friend of mine, Christine Tootoo, work with me. She helped with the actual acting workshops with her theatre experience. We also had someone filming the workshops—we worked with Qaggiavuut, which is an arts organization that supports performing artists in Nunavut, to create a headshot and a video for everyone who took part in our workshops. They all got pages on Qaggiavuut’s acting database, which is used as a resource to help incoming productions with casting for future projects.

Out of that I met these amazing amazing young women and girls and a couple of them moved onto the feature film with me and really helped shape the project. When myself and my co-writer Ryan Cavan were in the Arctic and we worked with these specific girls, they would hang out with us and talk about a lot of things that made their way into the script. It was a very collaborative process.

JM: Can you talk about the roles that contemporary sci-fi and traditional Inuit monster stories play in the film?

NI: There’s an element of traditional Inuit myth in there. Certainly, the idea of storytelling and sharing scary stories with your friends is something that was very common to me and my friends. When you’re from the North, where the environment is so harsh, our scary stories are comparatively terrifying. So the stories that we were told as kids, like ‘don’t get too close to the ice edge, qalupalik will snatch you’—qalupalik have long hair and green skin, and they’ll steal children and put them in their mouths and bring them underwater, and potentially keep them forever—there’s all of these terrifying stories in all these everyday scenarios.

I think when you’re growing up in a place like that, those kinds of magic just seep into the everyday, especially when you’re at the age where you’re believing in that kind of stuff a little bit.

JM: There must have been many challenges trying to film during an Arctic summer. Why choose to film on location in Panniqtuuq?

NI: We started filming in June of 2019. It’s where my nephews are from, and so it was great to see family in Pang. There’s 24-hour sunlight; it wasn’t the lighting conditions that we were used to. That doesn’t mean that we get to film whenever we want, but it does give us a little bit of flexibility. We’re still working with kids, so they have limited hours that they can be working.

The whole movie takes place over the course of the day. And so when we’re doing that [in Arctic summer] it’s a different kind of thing than when you’re working with a movie in any other location, because you’re having to keep on reminding yourself that it never really gets dark. You have to remind the audience in other ways that time is passing.

JM: What’s the highlight of the film for you?

NI: I was really excited to be able to work with Natar Ungalaaq, who played Atanarjuat in Atanarjuat: The Fast Runner. It was really great for me and the girls. We had this big professional crew, it felt like the real deal. But when Natar actually showed up to set, it was this movie star in our midst. It was really exciting, and it made the whole thing feel real. He’s from my home community of Igloolik, so that was definitely a highlight for me.

The other highlight was getting to know the community, the people that we met, the people that were on our crew, the people whose houses we lived in, who drove our boats and cars and all of these things—it wouldn’t have been possible if there wasn’t a chance to film this [in Panniqtuuq] and we had to film in Iqaluit. It was so hard to get to, it’s very remote, it’s very expensive to get there.

Not only that, it’s about a housing crisis—there’s not enough homes [in Panniqtuuq] for the residents. So to add in an extra 60-70 people was not feasible. We had to live in the high school for a full two months, we had to set up kitchens and have three meals a day produced for 60 people out of those kitchens. But it was really, really important to me that we didn’t just come in and leave, that we really embraced the fact that that we’re in this place and hunkered down and just tried to make it the best we could within this infrastructure that we had to create ourselves, because it doesn’t exist in the community.

I hope the impacts that we had on the community were positive. I’m so excited to be able to go back with the finished project and to share it with this community that made it possible. When I see myself represented on screen in ways that I haven’t seen myself before, it’s meaningful, even when it’s something silly, like a Star Wars movie. It’s important, I think, to feel seen and represented. I hope the movie does that for the community.

This interview has been edited and condensed for clarity.

Slash/Back premiered March 13, 2022 at the South by Southwest Film Festival in Austin, Texas, and is slated for wider theatrical release in June 2022.

Jessica MacDonald is a Toronto-based writer and editor who currently works as an Associate Editor at the Inuit Art Quarterly.

This story is part of the Nunavut Spotlight. View more content from the Spotlight here.

Qaumajuq is an innovative new museum dedicated to Inuit art and culture, a home for the largest public collection of contemporary…