Meet the Artists Behind the Sámi Pavilion 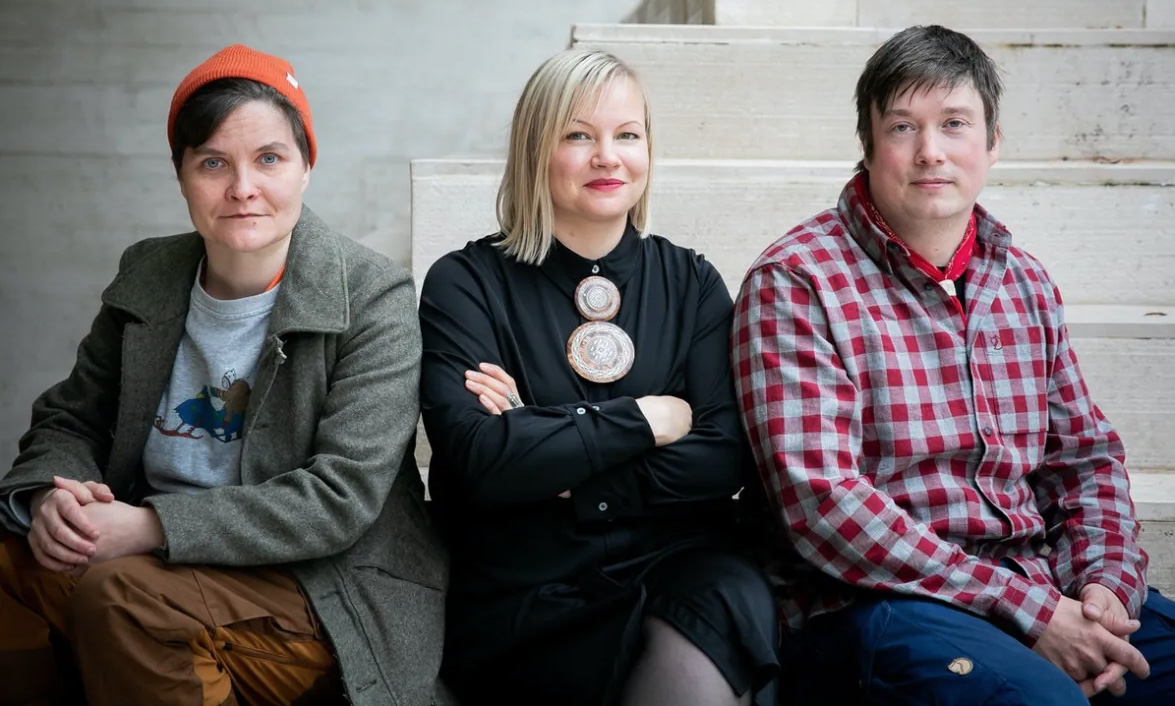 When the 59th Venice Biennale opens in 2022, it will make history by recognizing an Indigenous group as a nation in a pavilion bearing their name. This year, the Nordic Pavilion is being transformed into the Sámi Pavilion, representing three artists from the region of Sápmi (the Sámi homeland)—which covers the Scandinavian Peninsula and parts of the Kola Peninsula—into Sweden, Norway, Finland and Russia.

But who are the three artists who will fill the exhibition space with representations of Sámi art and culture?

Pauliina Feodoroff is a Skolt Sámi artist from Keväjäu´rr in the Finnish part of Sápmi and Suõ´nnjel in the Russian part, whose family is involved in traditional reindeer husbandry practices. A film and theatre director, screenwriter and Sapmi advocate, Feodoroff’s artistic practice investigates the role of modernisation and government policies in destroying the collective models of existence and land governance that underpin Sámi society.

Her first feature film, Non Profit, which took Feodoroff more than 10 years to shoot and finish, is the first Skolt Sámi full-length fictional film, and won the Kritiikin Kannukset (Critique Award) when it premiered in 2007 at the Skabmagova-Kaamos Festival in Inari, Finland.

Feodoroff served as President of the pan-Nordic Sámi Council, the highest political organization of all Sámi peoples, from 2006 to 2008. In 2009 she became artistic director of Helsinki’s Theater Takomo with Milja Sarkola, with whom she jointly won the Theatre Academy’s Alumnus/Alumna award for artists, pedagogues or other professionals for their outstanding achievement in theatre in 2012.

From 2018 onwards, her cross-disciplinary project What Form(s) Can an Atonement Take has brought together Sámi land-care practices and scientific knowledge to protect the waters and surrounding lands of the Njâuddam River in the Finnish part of Sápmi.

Máret Ánne Sara is a Northern Sámi artist from Guovdageaidnu/Kautokeino in the Norwegian part of Sápmi, whose work deals with political and social issues from a Sámi and reindeer-herding perspective. Known for experimenting with varied materials, approaches and collective art actions, Sara’s work has been commissioned for movie and theatre posters, CD covers and fabric prints, among others. Her first solo exhibition took place in 2006 at the Sámi Siida Museu in Enari, Finland.

Her first novel, Ilmmid gaskkas (2013), was nominated for the Nordic Council’s Children’s and Young Literature Prize in 2014  and republished in English and Norwegian. The follow-up Doaresbealde doali was published in 2014.

Sara is perhaps best known internationally for her project Pile o’ Sápmi, an installation of reindeer skulls and legal documents that began as a reaction to the forced culling of reindeer belonging to Sámi herders. Pile o’ Sápmi was first installed in February 2016 outside the Indre Finnmark District Court, and later presented as part of documenta 14 in 2017. The centerpiece of Pile o’ Sápmi, consisting of 400 bullet-ridden reindeer skulls, was acquired by the National Gallery of Norway in 2018.

Anders Sunna is a Northern Sámi artist from a reindeer-herding family in Kieksiäisvaara, who is based in Jåhkamåhkke/Jokkmokk, both in the Swedish part of Sápmi. His politically charged artworks narrate the history of the violence and oppression against the Sámi people, and his family’s longstanding conflict with the county administrative board’s reindeer husbandry delegation.

In addition to larger installations, Sunna’s paintings feature thick layers of colour, collage, graffiti techniques and motifs depicting the oppression of Sámi, including forced relocation and photos from the Swedish State Institute for Racial Biology.

Sunna’s first solo exhibition, GOT DEMOCRAZY, took place in 2013 at the Sámi Dáiddaguovddáš/Sami Centre for Contemporary Art in Karasjok, Norway. His work has exhibited all over the world, including in the National Gallery of Canada’s Àbadakone | Continuous Fire | Feu continuel in 2019 and at the Biennale of Sydney in 2020.

He and Máret Ánne Sara have actually collaborated on a project before, working together on a set of concert visuals for Lappaffair – Unfinished Business at Festspillene i Nord Norge (Arctic Art Festival), at Harstad, Norway, in 2016.

The animated short film he co-directed, Morit Elena Morit! (Wake Up Elena Wake Up!) (2017), won the Jane Glassco Award for Emerging Talent at the 2017 imagineNATIVE Film and Media Arts Festival in Toronto, ON, and Best Indigenous Short Film award at the 2018 Skábmagovat Film Festival in Inari, Finland.

Following the Sámi custom of learning from elders of the community, all three of the artists featured in the Sámi Pavilion will benefit from the individual guidance of elders: Feodoroff will be guided by Sámi educator and professor emerita Asta M. Balto; Sara by reindeer herder and Sámi knowledge bearer Káren E. M. Utsi; and Sunna by Sámi professor of law and juoigi (practitioner of joik, the Sámi musical practice) Ánde Somby.

Jessica MacDonald is a Toronto-based writer and editor who currently works as an Associate Editor at the Inuit Art Quarterly.