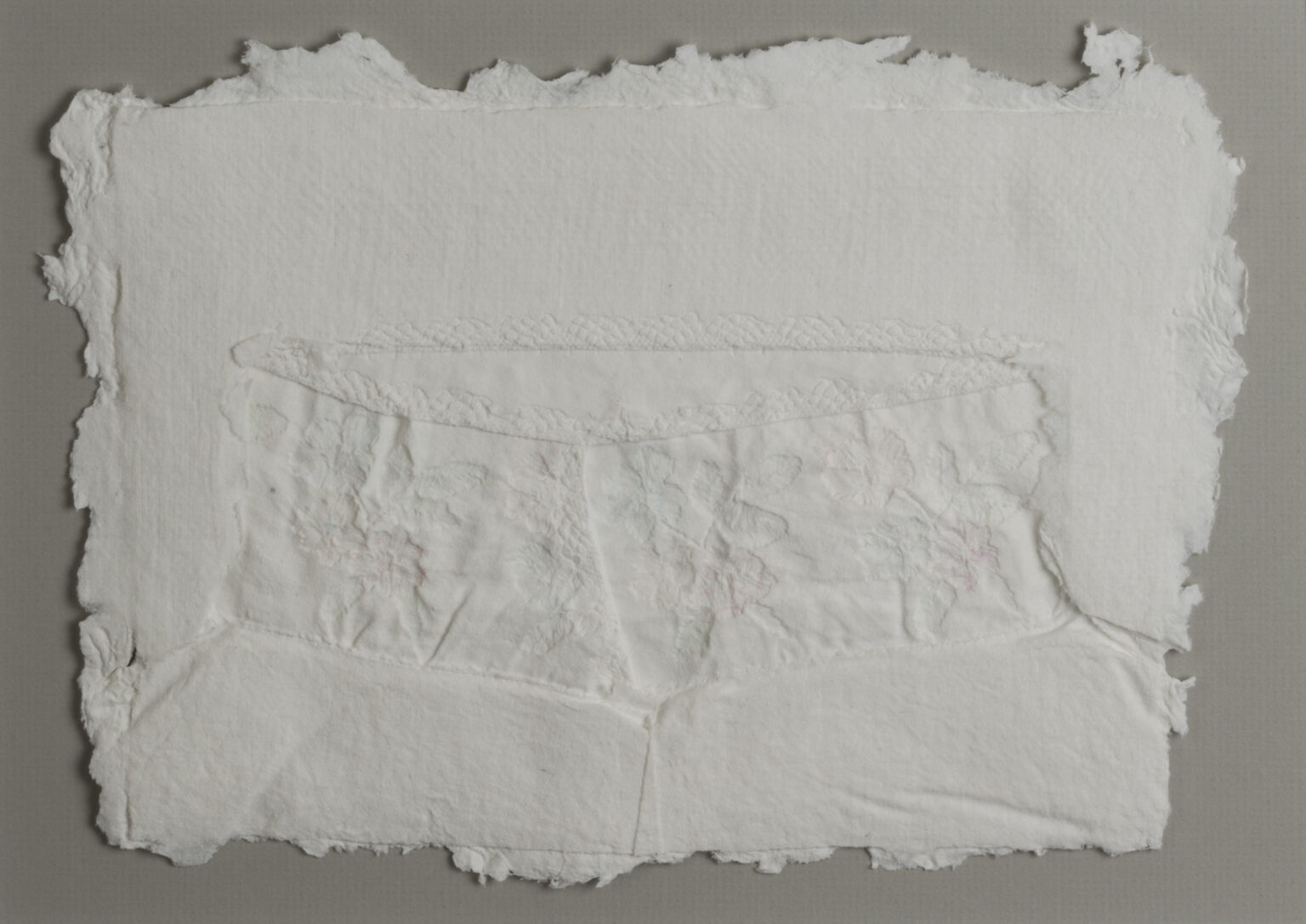 “I hope that my way of making art can reflect the time I live in—as a product of the time, environment, circumstances, society, and of the life I live right now. Art should shift and redraw boundaries.” – Lisbeth Karline Poulsen

Lisbeth Karline Poulsen was born in 1981 in Nanortalik. She attended the Art School in Nuuk, starting in 2004, and later completed her education as a visual artist at Aarhus Art Academy. She has been living in Nuuk since 2011, working as an artist. In 2013, a painting by Poulsen was chosen as the Greenlandic Christmas seal by the Greenlandic Christmas Seal Foundation, and in 2016 she became a member of KIMIK, the Association of Greenlandic Artists.

Three untitled works by Poulsen were realized in 2015 after the exhibition The White Out (where, among other items, she exhibited a whole Greenlandic national costume sewn in white) and in connection with a workshop held at KIMIK during Nuuk Nordic Culture Festival 2015.

As Poulsen stated in the book KIMIK ukiut 20 år (published on the occasion of KIMIK’s 20th anniversary): “A topic that has filled my mind for the past couple of years is the Greenlandic female national costume. I still have a long way to go in exploring the wealth of symbolical elements, all the patterns and materials in it.” The three untitled works function as a form of deconstructing the female national costume and provide an example of Poulsen’s exploration of the costume in its single parts.

In an interview Poulsen also stated the following: “[while] the theme is often the Greenlandic national costume (…) I do find a new form of expression, and that’s because I’m driven by exploring and trying out new materials.” In this case we have different parts of the national costume, namely the collar, the kamik’s ornamentation and the beaded necklace, all imprinted on paper. The piece featuring the necklace contains a small additional detail that underpins the main motif: a small area decorated with a thread and beads. It is a fine detail which interrupts the otherwise consistent use of material. These three works are part of her first series of prints on paper and were created on the occasion of KIMIK’s workshop in 2015. Poulsen has since made another series of prints on paper, which were titled afterwards in connection with other exhibitions. In her work, Poulsen also deals with time and unfinishedness, since it is her opinion that works do not necessarily need be finished or, for that matter, identical.

Poulsen is very inspired by different materials and handicraft techniques, such as paper print. When producing her prints, she starts by blending and soaking paper to form a pulp. Then she prepares a fine mesh strainer, consisting of a metal mesh. At that point the object to be printed—for instance the bead collar of the national costume—is placed on the strainer, and the paper pulp on top of it. The water is then pressed out of the paper, in such way that the paper adheres closely to the collar. Finally, she removes the paper and hangs it to dry for a couple of days.

Lisbeth Karline Poulsen’s current practice keeps engaging with handiwork and materiality, including a stamp for TELE-POST and other small projects in which she tufts carpets with birds and tupilaks.

The White Out and the Female National Costume

The White Out, which was the starting point for the three untitled works, was shown in the Greenlandic House in Copenhagen and in the cultural centre Katuaq in Nuuk in 2014. The focal point of the exhibition was Poulsen’s reinterpretation of the traditional Greenlandic female national costume. The composition of her white costume is highly faithful to the traditional one, with the one exception that all colours have been removed, thus resulting in a plain white. Poulsen additionally plays with one’s expectations of a familiar and traditional object, turning such expectations upside down and yet without making the costume unrecognizable

The Greenlandic national costume varies a lot in appearance depending on its geographical origins: West Greenland, East Greenland, or the Qaanaaq area. In her works, Poulsen refers specifically to the female national costume from West Greenland. There are some deep-rooted expectations concerning what this costume should look like. The upper part is certainly the most peculiar, with multi-coloured beaded collar and cuffs sewn on the fabric; but there are also other colourful parts in the costume, such as the pink, red or lilac anorak beneath the bead collar, and the kamiks with their floral embroidery. The varying colour of the anorak may be related to a woman’s age—the darker, the older. Women’s kamiks can vary in colour as well, from white to red or black.

When Poulsen empties the national costume of its colours and alienates its parts from the whole, she does not only concurrently dispel our expectations about its appearance. She also does away with the ability of these different parts to be recognized and deciphered. One will still recognize themself to be dealing with a female national costume, but without being able to deduce anything about the owner’s age or marital status.

The concept of White Out refers to the weather phenomenon of the same name occurring when a snowstorm, fog or something else blurs all outlines and contrast in the environment. This phenomenon is reflected in Poulsen’s act of removing people’s expectations of what a national costume should look like, and instead replacing them with a new, clean and white reality.

Credit: Credit: This article was originally published by the Nuuk Art Museum as part of their “Behind the Art” series. COURTESY NUUK ART MUSEUM.

In 1996, Pia Arke took some photographs with a pinhole camera at Lønstrup Cliff in North Jutland, Denmark. That resulted in a series of nine photographs, one of which,…