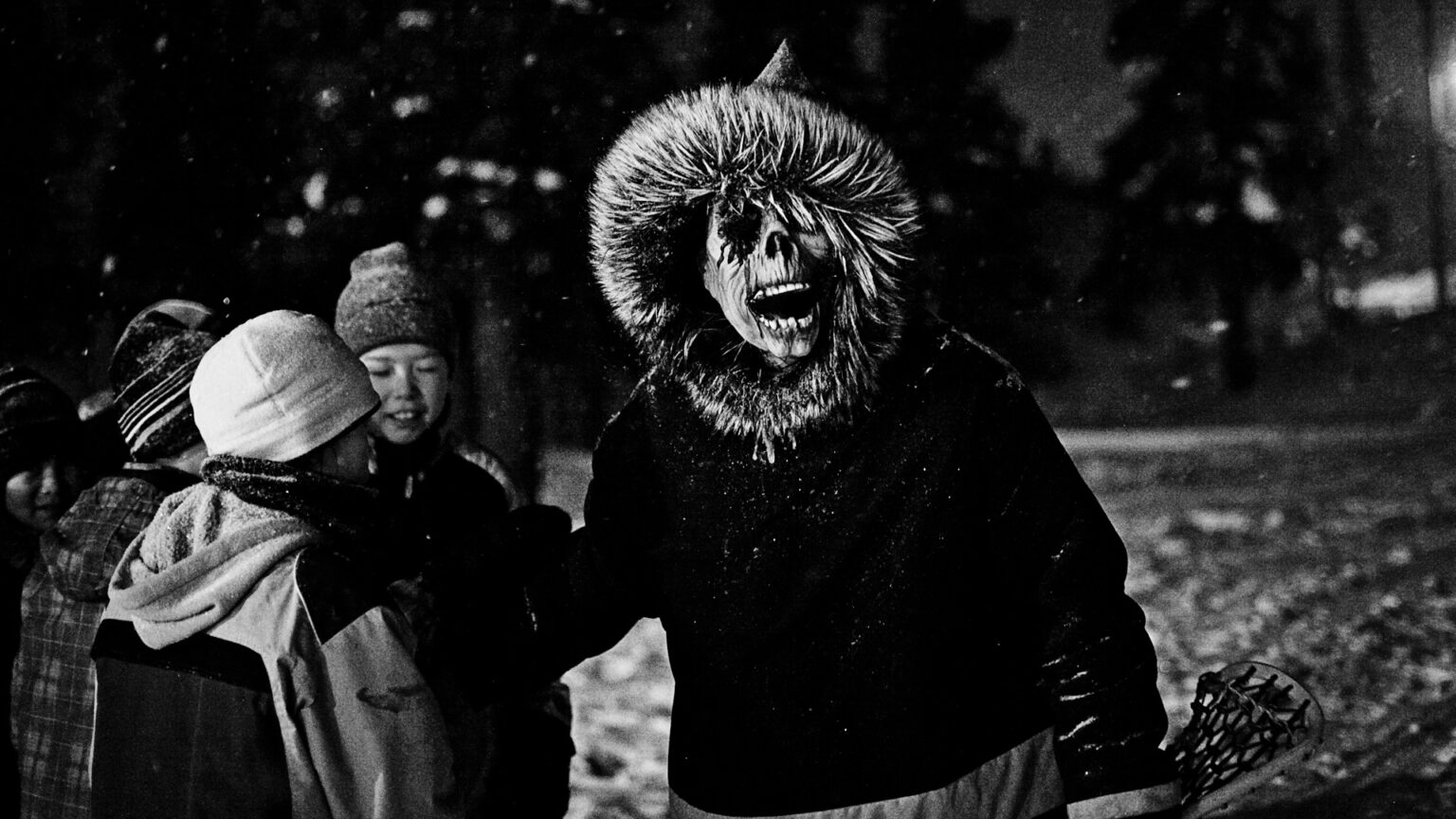 A flexible format that lends itself to experimentation, the short film anthology can carry multiple voices and stories, accommodating diverse creative approaches. With the Labrador Documentary Project, four emerging Inuit filmmakers are crafting short films about life in Labrador and Nunatsiavut, their corner of the world.

In Hebron Relocation, photographer and filmmaker Holly Anderson revisits the 1959 forced relocation of Inuit from Hebron to communities such as Makkovik. In Miss Campbell: First Inuk Teacher, visual artist and curator Heather Campbell pays tribute to her grandmother Evelyn Campbell, one of the first licensed Inuk teachers in Labrador. In the award-winning Nalujuk Night, photographer Jennie Williams documents a fascinating annual event that takes place every January 6 in Nain, when masked figures move through the community. And in Evan’s Drum (now available to stream on NFB.ca), journalist and activist Ossie Michelin explores the revival of the Inuit drum, through the tender relationship of a mother and her five-year-old son.

Credit: This video was originally published in the Press Kit for Evan’s Drum. COURTESY NFB.

The Labrador Documentary Project is led by Inuit through community collaboration and focusses on topics selected by the filmmakers through a process of reflection and community engagement. This initiative aims to elevate Indigenous storytelling in Newfoundland and Labrador, create film opportunities for Inuit, and proactively diversify our industry. The Labrador Documentary Project is produced by the NFB Quebec and Atlantic Studio (Associate Producers Jason Edmunds and Jayde Tynes, Producers Latonia Hartery, Kat Baulu and Rohan Fernando, and Executive Producer Annette Clarke).

Arctic Song, by Inuit artist, storyteller and co-director Germaine Arnattaujuq (Arnaktauyok), is an animated short about Inuit creation stories from the Iglulik region in Nunavut: the raven who brings daylight to the world, the giants who turn into mountains, and the animals that create shimmering constellations and northern lights.

The film makes traditional knowledge accessible to younger generations by combining some of Arnattaujuq’s existing graphic art with animation and Inuktitut narration. The stories are sung in haunting tones, lending a sense of meditative beauty to the film.

Arctic Song not only shares Inuit knowledge in Inuktitut, but highlights the rich world of Inuit art that has always flourished in the Canadian Arctic and continues to delight international audiences.

Arctic Song represented a creative challenge for Germaine Arnattaujuq. Her artwork has always captured the essential aspects of Inuit traditional stories in one frozen image. For Arctic Song, Germaine worked with animators to draw layered backgrounds and hand-drawn characters in motion, frame by frame. With these art assets, digital painting, camera moves and Germaine’s constant directions and review, the world of Inuit traditional stories came to life.

We witness Tagaq’s intimate relationship with the Nuna—the Land—a living, breathing organism present in all forms of her improvised performances. Ever Deadly weaves concert footage with stunning sequences filmed on location in Nunavut, seamlessly bridging landscapes, stories and songs with pain, anger and triumph—all through the expressions of one of the most innovative musical performers of our time.

“Many people have approached me with a proposal to engage in making a documentary,” says Tagaq. “I tend towards being camera shy (offstage), so it wasn’t until I was approached by a friend that a documentary happened. Chelsea was a friend I met through Rae Spoon.”

“So we jumped into making Ever Deadly. Chelsea pushes. I pull. We got riding the same caribou and off we went! This process has been exhilarating and interesting. Bringing the crew up to Nunavut was the highlight for me. Realizing that’s how I feel in the South, in your culture. I am always cautious, not quite knowing how to behave, not having a handle on the rules. Watching the crew learn how to drive an ATV on the tundra and take in the majesty of the land gave me a sense of peace. Thank you to Chelsea and the crew for taking the time to film.”

The production worked with the Piruvik Centre, an Iqaluit-based training centre founded by Leena Evic, to implement cultural competency training for the crew. Evic walked the production team through the colonial timeline and its resulting impact on Inuit culture, and the session was open to the entire studio and Tanya’s management team at Six Shooter Records.

On Evic’s suggestion, the production hosted a community feast in Cambridge Bay when they returned for their second shoot, hiring a local catering company to prepare a traditional meal.

Ever Deadly is co-created by Tanya Tagaq and Chelsea McMullan, director of My Prairie Home, and is currently in post-production. Featured performers include Tagaq’s bandmates Jean Martin and Jesse Zubot and Iqaluit-based artist Laakkuluk Williamson Bathory. Featured illustrations are by Inuk artist Shuvinai Ashoona, and the animation team was led by Inuk animator Glenn Gear. The chief sound recordist on the concert shoot was Alex Unger, working with a team from Tattersall Sound & Picture. Ever Deadly is produced by Lea Marin, associate produced by Kate Vollum and executive produced by Anita Lee at the Ontario Studio.