Artist Spotlight: The Nunatsiavut Government acquires a traditional commander coat with freehand embroidery from a respected Elder and master artist. 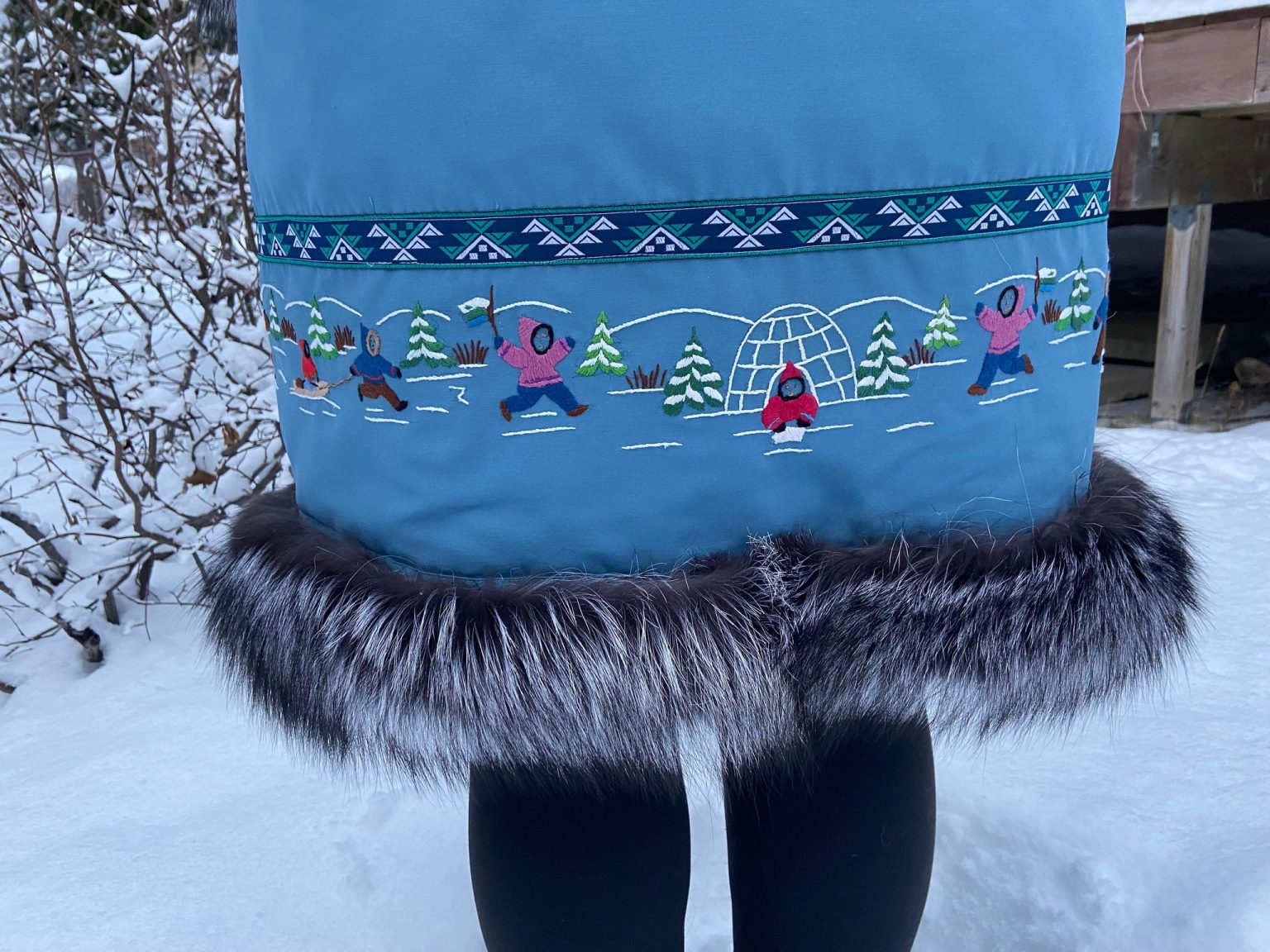 Nellie Winters is an Elder from Okak Bay living in Makkovik, Nunatsiavut (Labrador). She is a respected artist whose work is commissioned and exhibited by galleries, museums and private collections in Canada and around the world. She is widely respected as an Elder, knowledge holder, translator, author and educator.

She is the author and illustrator of Reflections from Them Days: A Residential School Memoir from Nunatsiavut.

Nellie Winters, known to many as “Aunt Nellie,” is one of Nunatsiavut’s well known “master artists.”

Winters was born in Okak Bay on the North Coast of Labrador, where she lived before relocating to Makkovik in 1956, where she still currently resides.

She is a self-taught seamstress, who learned to embroider from her days at boarding school, sewing garments for her children as they were growing, and eventually being able to sell items she has handcrafted to the community and elsewhere.

Her work has been commissioned and exhibited by galleries, museums and private collections both in Canada and internationally; she was also invited to show her work at the 1976 Montreal Olympics.

She published a book in 2020, Reflections from Them Days: A Residential School Memoir from Nunatsiavut, which contains her personal memoirs and stories, as well as her own illustrations.

For her extraordinary contributions to Inuit art and cultural life, Elder Nellie Winters received the degree of Doctor of Laws, Honoris Causa from Memorial University on January 21, 2021 in Happy Valley Goose Bay.

In November 2021, the Nunatsiavut Government’s Department of Tourism was successful in purchasing a traditional commander coat with traditional freehand embroidered inukuluks from Aunt Nellie. Originally it was created for the purpose of auctioning at the recent Nunatsiavut Art & Craft Christmas Auction but once the department was made aware of the coat and of it potentially being her last coat, it was quickly decided to buy the piece and add it to the permanent Nunatsiavut Government collection.

Nellie currently also has a traditional akulik with freehand floral embroidery currently on display at Illusuak Cultural Centre as a part of the permanent five communities exhibition.

This new coat, Aunt Nellie’s Last Coat, will be shown publicly at a fashion show on opening night of the upcoming Heritage Forum on June 13th, 2022 in Makkovik. Afterwards, it will go on permanent display at the Nunatsiavut Government assembly building in Hopedale.

This story is part of the Nunatsiavut Spotlight. View more content from the Spotlight here.