How I Choose to Carry on My Family’s Artistic Legacy 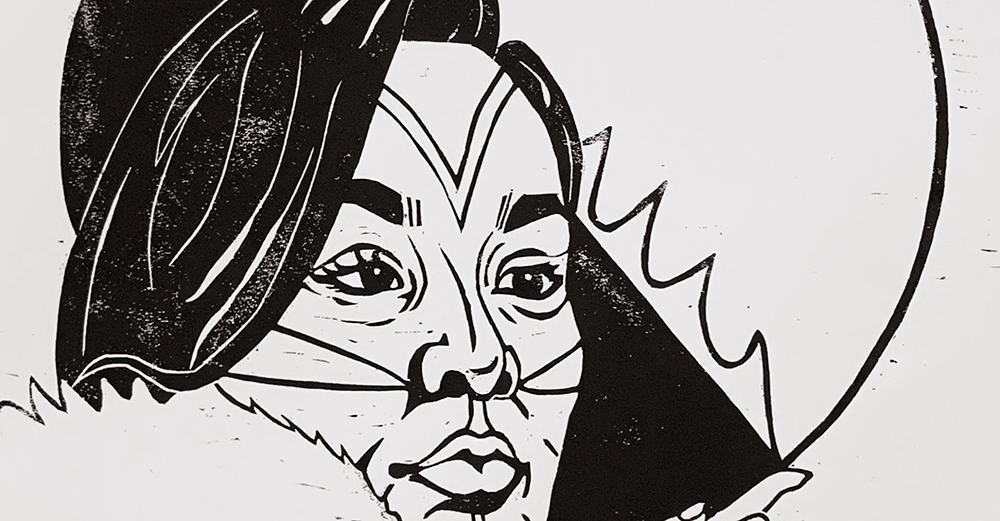 My grandmother Victoria Mamnguqsualuk (1930–2016) was a well-known artist from the Back River area near Qamani’tuaq (Baker Lake), NU. She might be best known for depicting Inuit legends in drawings, prints and wallhangings, and was one of the first artists to translate traditionally oral stories in a new way, solidifying our legends in physical pieces of art.

She lived a nomadic life until she and my grandfather, Kayuryuk, moved to Qamani’tuaq in 1963 to be with their children who were attending residential school there. My grandmother only spoke Inuktitut. I’m sure she could fully understand English towards the end of her life, but as it happened, I was told our Inuit legends by her son, my dad, in English.

My dad and I used to go out on the land for weeks at a time up the Thelon River. My dad had been taught how to boat up the river’s many rapids by his uncle. When I was young, we’d boat up river, set up camp and hunt by foot, walking to the top of the biggest hill near us to scope out caribou. And after we caught one, he would ammaq, or carry on his back, the animal back to camp and keep it under canvas away from the sun until we went back to town.

Sometimes it would rain for days when we were on the land. This is how I learned our creation stories and legends: inside our canvas tent with a background of falling rain. I heard of a woman marrying a bird and having her fingers cut off by her fearful father, ultimately becoming the sea goddess Nuliajuk (Sedna); I heard of Kiviuq’s adventures constantly running after his fox-wife; of a woman giving birth to a litter of humans and puppies and I also heard of a sister and brother becoming the sun and moon.

Traditional stories were a part of my life, upbringing and physical surroundings. I have wallhangings my grandmother sewed showing a few of Kiviuq’s adventures and I also have a gorgeous print my grandmother gave to me of the origins of the sun and moon.

The short version of how the sun and moon came to be—or at least how I heard it from my dad—goes like this:

A young woman is asleep in an iglu with her family. During the night she is accosted by an unknown man, who disappears into the darkness after touching her inappropriately. She doesn’t know who is touching her and wants to find out. After numerous nights she has the idea to smudge soot from the qulliq on her hands and rub the blackness onto the assailant’s face while he’s on top of her. After she carries out her plan, she lights the qulliq to find it’s her brother with black soot all over his face. She flees into the night, still holding the qulliq, and becomes the sun. Her brother, with black soot still on his face, chases after her and becomes the moon.

My grandmother depicted this story in a woodcut print with stencil titled Sisters, Going Up, which was part of the 2001 Baker Lake Print Collection. I believe its title must have been lost in translation, because the story is about a brother and sister, not two sisters, who become the sun and moon. The words for siblings in Inuktitut depend on age and the gender of each person, so the title for this piece was probably meant to be Siblings, Going Up.

In the bottom right of the print, Malina is confronting her brother Igaluk inside of the iglu. Malina is dressed in an amauti, the traditional women’s wear that can accommodate a baby in the back pouch. You can recognize her throughout the image because of the longer hood and the aquq (rounded back flap) of her amauti. Malina is shown running away from her brother to the right of the same iglu, and in the bottom-left corner she continues running. Igaluk is shown on top of the iglu, continuing to chase her.

My gramma’s artwork tells a story, but not in the usual way that Western society is used to seeing chronological events. Mamnguqsualuk wasn’t raised in the school system, so the piece pays no attention to Euro-Westernism’s left-to-right reading convention. She starts the tale in the bottom right of the print, heads left and then upwards. In the top-left corner of the image, we see Malina still fleeing from her brother into the sky, and finally they become trapped in their endless chase, as the sun and moon in the top right-hand corner.

This version of the sun and moon story is exactly the same as I was told as a child. It can be told in slightly different ways across the circumpolar North, but at its core it’s the same: a woman asleep who is attacked by a loved one.

As an adult, looking back on the stories I grew up with, I noticed how much violence against women threads through almost every story. For example, the sea goddess is hacked to pieces by her own father after a forced marriage, and Kiviuq chases a wife who has attempted to escape their relationship numerous times.

Gendered violence appears constantly in my grandmother’s art depicting traditional legends. It’s interesting looking at her work now that I too have become an artist. Early in my career, I made a conscious choice to depict beautiful, happy scenes, not in the absence of negative experiences but as a contradiction. By showing my grandmother’s art together with my art, I want to shine a light on our legends’ gender inequality and the power relations that hide in plain sight.

I feel proud to come from a legacy of artists and storytellers. I know my traditional stories and I am thankful to have been raised and educated in my Inuit traditions while simultaneously given the space to be able to question inequality. I believe in our traditional story of how the sun and moon came to be; I love it. In no way do I want to erase or change Inuit legends to fit a more consumable narrative. Our stories are exactly as they should be, and they connect Inuit across the North with family, culture and history.

But I want to show what could be for the female characters in these traditional stories. In this case, I want to create a story where the sun goddess is the main character of her own story. My print Malina shows a strong, beautiful Inuk woman as the goddess of the sun. In my version of the story, she wakes in the morning to light the qulliq to start the day and warm her family. She stands proudly, taking up the whole frame of the piece. She holds a taqqut to light her qulliq, shown behind her, whose light ignites the sun and brings the world to light. This is the first print in a series I envision. I want to reimagine each female character in our legends as her own person, reframing the events from a feminist perspective.

When I look at my grandmother’s print of the origin of the sun and moon, I see more than the traditional story I was told as a child. I see the world my grandmother grew up in. I see the hard work my family undertook learning a new way of life while also keeping their culture alive. I see my grandmother using new tools to tell oral stories and I can see where I fit in this timeline of change and innovation. I can continue the tradition of storytelling through art, passing on stories to younger generations. I hope they will continue to question and create beautiful stories and worlds to exist within.

Gayle Uyagaqi Kabloona is an Inuit artist and writer currently residing in Ottawa. She believes art and writing are valuable tools to express herself in a broader way, and to make the world a little bit more Inuk. Her short story, “Utiqtuq,” appeared in Taaqtumi: An Anthology of Arctic Horror Stories (2019), published by Inhabit Media.

How I Choose to Carry on My Family’s Artistic Legacy

Helen Iguptak was born in Perry River, Nunavut and lived in Gary Lake, NWT before moving with her parents to Rankin Inlet because of the nickel mine.