Contemporary Inuit Art and Climate. ArtCOP21: a global program of exhibitions, installations and more that emphasize the interrelatedness of climate and culture. Can art communicate the human effects of climate change at a deeper level than facts and figures alone? 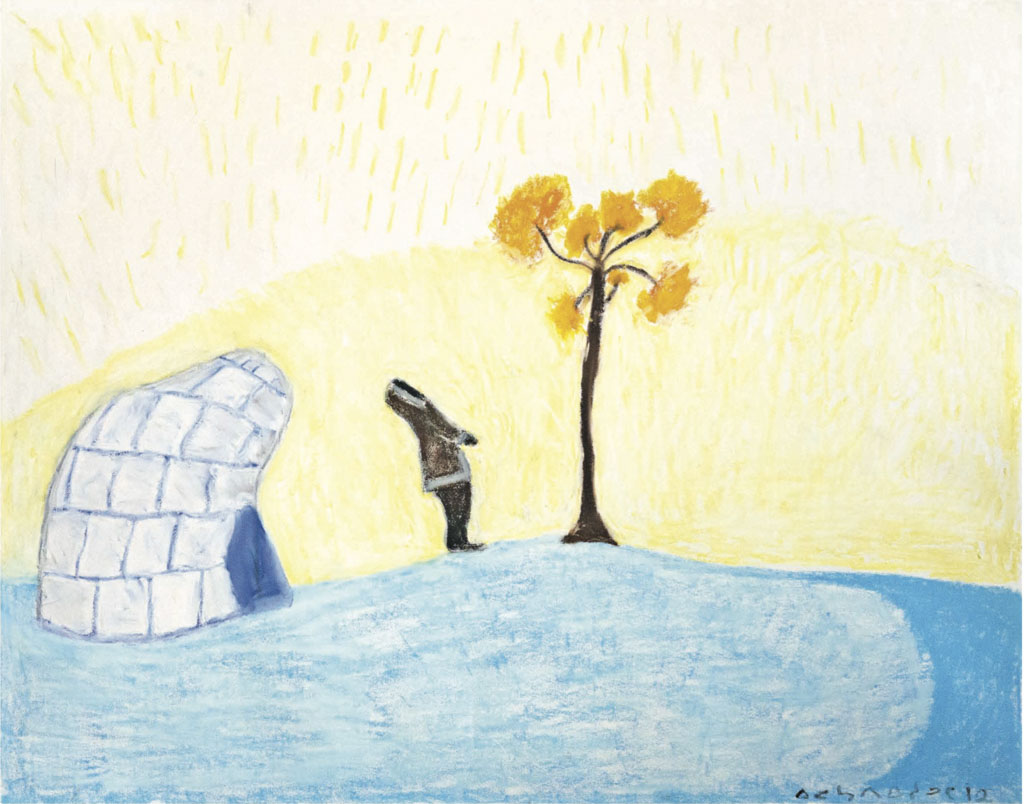 In advance of the United Nations Climate Change Conference this winter in Paris, the Coalition for Art and Sustainable Development and the Cape Farewell project launched a global program of over 550 events. The Paris negotiations (also known as the Conference of the Parties, or COP) were the hub for this project, entitled ArtCOP21.

The plan was simple: exhibitions, installations, performances, talks, workshops and screenings all over the world would emphasize the interrelatedness of climate and culture—that art could communicate the palpable human effects of climate change on communities at a far deeper level than facts and figures alone.

Of the hundreds of ArtCOP21 events, only a handful featured works by or involving Inuit artists. Inuit works included a project by conceptual artist Mel Chin entitled The Arctic is Paris (2015), which featured Greenlandic Inuit hunters Jens Danielsen and Mamarut Kristiansen driving a dogsled through the Paris streets, and a play called Sila (2015) by Chantal Bilodeau featuring poetry by Taqralik Partridge. It’s a missed opportunity; Inuit makers have been cataloguing the direct effects of climate change in their artwork and stories for years, and without their voices, the urgency of our action against climate change is diminished.

Here in the South, I’ve witnessed a warm winter—the anomalous temperatures brought about by El Niño mingle uneasily in my psyche with the warnings that average global surface temperatures have risen to over 1 degree Celsius above pre-industrial levels. But in the Arctic, the effects of climate change (thinning ice, changes in polar bear behaviour due to depletion of their natural prey, shifts in wind and unpredictable weather) are not distant, removed, conceptual. They are felt, and they are changing how Inuit live.

This is the thrust of Zacharias Kunuk and Ian Mauro’s film, Inuit Knowledge and Climate Change (2010), the first Inuktitut-language film to address global warming and integrate traditional Inuit knowledge into the discourse of environmentalism. The film is devoid of sweeping voiceovers declaring the apocalyptic state of changes to the ice, sea, and land. Rather, Inuit Knowledge and Climate Change includes careful, measured, sometimes strained and passionate voices—voices of elders in Inuit communities recounting the steady changes they are witnessing in the North.

Inuit artist Elisapee Ishulutaq (1925–2018) appears in Kunuk and Mauro’s film, testifying to the state of the Arctic’s climate. She has also been testifying through her drawings, such as Climate Change (2012). The work depicts a lone Inuk in a parka, an igloo and a tree on either side. The figure faces the tree, which has begun to bloom in brilliant orange, despite being rooted in a patch of icy ground. To the back of the figure, a melting igloo lurches uncomfortably to the side; built of solid, stable blocks of snow, its melt takes on embodied, anthropomorphic dimensions as it leans longingly towards the figure. (Can an igloo long for something? Looking at Ishulutaq’s drawing, I feel distinctly that it can.)

Ishulutaq was born in 1925, and as one of the oldest living artists in Panniqtuuq (Pangnirtung), NU, she bears witness to a cultural shift that has happened in tandem with shifts in climate—a shift from a traditional lifestyle towards an increasing industrialization of the Arctic and pressure to participate in a Southern capitalist commodity culture. I’m left to imagine the impact of this shift on the way the natural world is observed and perceived across generations—it’s clear Ishulutaq is attuned to the changing land, having spent nine decades on the permafrost.

It’s also clear in the work of Jaco Ishulutaq, Elisapee’s son and a carver since the age of 16, that the relentless progression of climate change is being contemplated in rhythm with the work of the chisel. In Ishulutaq’s carving, Global Warming (2010), bone thrusts upward from murky soapstone water. Though iceberg- like, upright, the natural curvature of a walrus skull evokes holes, as if the skull is tender ice, ridden with fractures, melts, and fissures. Creatures from the water below swim upward across the surface of the bone-ice—a fish, a polar bear, a narwhal. Meanwhile, human hands reach across the dark waters. The creatures swarm, but the walrus-skull structure maintains a deep sense of balance and integrity, making it unclear if the hands (and the ivory leaves sprouting from the water alongside them) are reaching out as a call to action, or to desperately hold each other. Both seem apt. Perhaps, more literally, they are an indication that Indigenous peoples across Canada are already acting against climate change, against environmental imperialism and a structural push to industrialize and commodify their lands.

Or could the hands refer to the sea goddess, Sedna, whose fingers were cut off as she clung to the side of her father’s kayak and eventually became the creatures of the sea? In works by Ningiukulu Teevee and Alec Lawson Tuckatuck, Sedna appears not merely as an illustration of the legend, but in mourning and anguish over the changing waters.

In Sedna Speaks (2011), Tuckatuck depicts the sea goddess emerging atop an ice floe. From one side, the contours of the figure carefully trace the silhouette of a narwhal. From the other, Sedna’s long locks of dark hair consolidate to form the narwhal’s flippers, its body opening to reveal the shapeshifting goddess’s head and torso—pendulous breasts and a face whose mouth is open in speech or song. There’s a sense of urgency to Tuckatuck’s carving, as if Sedna’s voice could deliver a warning just in time.

In Ningiukulu Teevee’s ink drawing, Untitled (Sedna by the Sea) (2001-2002), there is no such optimism. Sedna sits and smokes, a few stray bottles littered around her, as she watches over the sea. On a nearby shore behind her, trucks push muck around a dumpsite and a sewage vehicle drains waste into a sad, dripping puddle at the water’s edge. Teevee has drawn Sedna many times, but she has never looked quite so despairing. Where the sea goddess often symbolizes the vibrancy of Arctic waters, in this particular drawing she appears resigned to a dismal fate. Unlike Tuckatuck’s carving, Teevee’s drawing is not a plea for a global awakening, it’s an admonishment. Sedna by the Sea is a grim view of a world where industry dominates and the seas suffers so deeply that their goddess is forced to abandon them.

There’s a place for the darkness of this work—it’s a necessary and vital criticism of Southern industrialism’s impact on Northern peoples and their ways of life. I feel deeply uneasy that this work isn’t widely seen in the South, not being as collectible, as light-hearted, as iconic as scenes of hunting, fishing, building igloos, drawings and prints and carvings of bears and birds.

And yet a growing number of Inuit artists face this difficult subject matter head on, sometimes staging the tension between Northern and Southern visions of the Arctic directly in their works. Bill Nasogaluak’s Bear Falling Through Rotting Ice (Arctic Angst) (2006) renders an encounter between a bear and its declining habitat in white and green-blackstone. While polar bears often populate Inuit carvings and works made expressly for tourist consumption, Nasogaluak’s falling bear does not become a symbol of novelty or joy, nor a charismatic representation of Arctic life, but an object of anxiety.

Where the polar bear might typically represent a romanticized version of Northern experience to a Southern audience, Nasogaluak’s bear starkly undermines this sunniness. The failure of the ice to hold the bear’s weight and power is deeply uncomfortable and deeply true to life. Bears are smart, strong. They know the land they walk on and have been built to use it to their advantage as hunters. But every year, bears fall through the ice, their strong presence and sharp instinct undone by persistent and insidious softening. The bear in Nasogaluak’s sculpture also acts as a symbol for life of all kinds; humans and other creatures that have travelled over sea ice for years are now finding its conditions increasingly precarious and unpredictable, leading to a decreasing ability to rely on Inuit traditional knowledge as a way of safely assessing travel routes.

The effects of climate change on the ecology of the Arctic are inextricably entwined with the lives of those who have lived on the land for thousands of years. Tim Pitsiulak (1967–2016) traces the human consequences of the warming world on the face of an elderly man in his drawing, Climate Change (2011). While the left half of the man’s face is stoic and ridged with deep, white wrinkles, the right half is composed of crumbling, drifting ice. Set against a dark paper, the marks of Pitsiulak’s pencil also seem to indicate the erosion of his subject’s resolve. The body and the land are considered alongside each other, and the profound consequences of the ice’s decline are etched into the man’s face. Pitsiulak’s drawing points to the important witnessing of tradition and change that is occurring in contemporary Inuit art and culture. This is echoed in Kunuk and Mauro’s film, as an older generation with direct experience of a traditional way of life struggles to convey the seriousness of the shift in their reality brought about by climate change.

If the Paris talks were our chance (and it seems they were at least a chance—an opportunity to set a cap on an increasing global temperature), then I’m left to wonder what it could have meant to foreground Inuit voices in the art projects developed for ArtCOP21. There is clearly no shortage of Inuit artists responding genuinely, urgently, and directly to the lived experience of our warming world. I feel convinced, looking at these works, that the story of climate change is not going unheard within Inuit communities. I feel less convinced, however, that we are listening as much as we ought to be in the South.

Inuit perspectives on climate change are built on lifetimes of observing the environment, chronicled in objects that chart its changes in lines on the face, fissures in the ice, the lurching of an igloo. We need to find space to hear the testimony held in objects by Inuit makers when we convene to talk about art and the environment.

Alison Cooley is a critic, curator and educator based in Toronto, ON. Her research deals with the intersection of natural history and visual culture, socially engaged artistic practice, and experiential and interpretative dimensions of art criticism. She is the 2014 recipient of the Middlebrook Prize for Young Canadian Curators and her work has been published in Canadian Art, KAPSULA, FUSE, Blackflash and Magenta, among others.