Iglulik-based collectives Isuma and Arnait Video Productions harness the power of film to retain, recall and preserve collective memory, significantly contributing to the revitalization of culture and language. 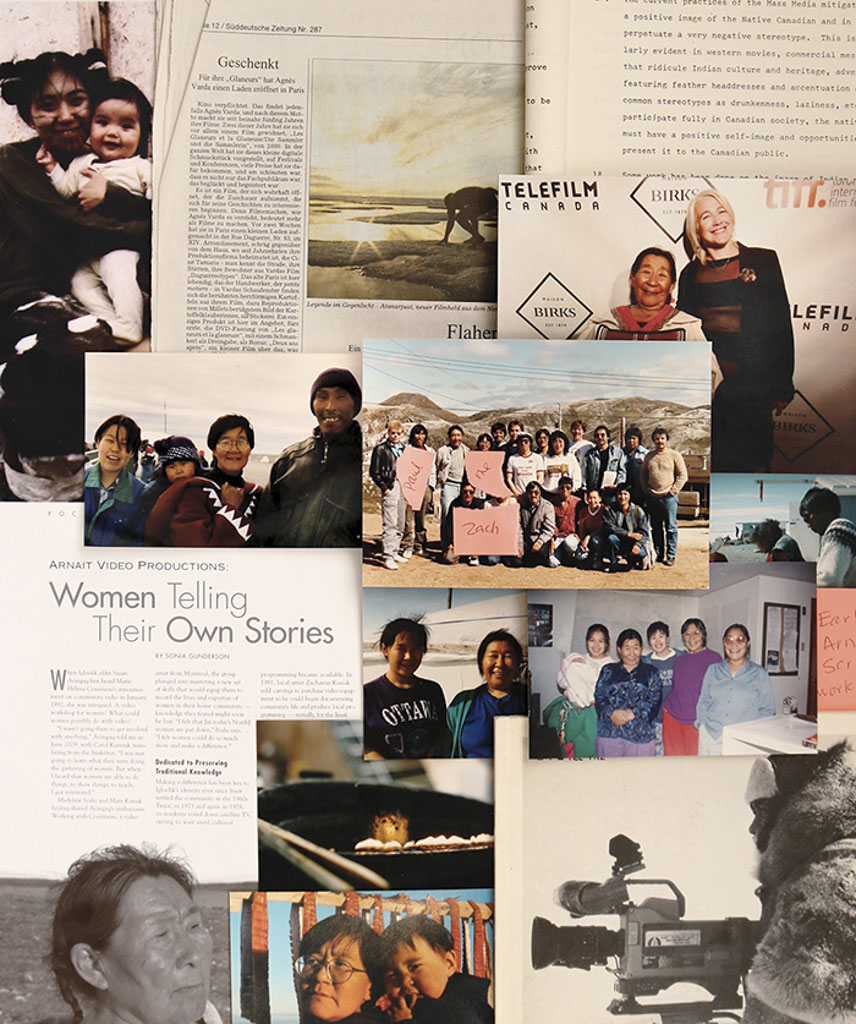 I recently watched an episode of Scottish comedian Billy Connolly’s Journey to the Edge of the World (2009), a Northwest Passage travel series. This particular episode featured Connolly visiting the Nunavut communities of Iqaluit, Panniqtuuq (Pangnirtung), Iglulik and Mittimatalik (Pond Inlet). The teaser for the show on a popular website stated that Connolly “goes on a stomach-churning seal hunt with an Inuit family.” While in Iqaluit, he visits the Nunatta Sunakkutaangit Museum and views a historical film. Sitting next to him in the compact theatre is a middle-aged Inuk man.

Connolly narrates that Inuit depicted in the film are happy, healthy and fit and bask in their environment. He is then shown observing the current vista and Inuit of Iqaluit, proclaiming sadly that he cannot say that is the case today. In the conclusion of the episode, referring back to the moment in the museum, Connolly pities the Inuit man also watching the film, and laments that the only recourse left to contemporary Inuit to experience authentic and traditional culture is through historical film.

Having witnessed the Arctic landscape, having experienced the hospitality of his Inuit hosts and having been welcomed into their culture, I find it curious that Connolly chooses to conclude the episode by voicing such a negative sentiment. However, I am not surprised. He is not the first transient visitor to presume they are witness to the death of a proud and ancient culture.

Culture is not static. Inuit have been adapting to the changes around us for millennia, retaining skills, traditional laws and values deemed essential and imparting them onto preceding generations. Until very recently, spoken language had been the only method of preserving our history, songs, poetry and more.

For Inuit, the introduction of the written word and other means of storing knowledge have all been vital to keeping remembered history and aspects of culture and traditions alive. In Iglulik, the use of film has been the most successful and effective medium for contemporary Inuit to capture, document and present our culture and worldview.

I was teaching kindergarten when television finally arrived to Iglulik in the fall of 1984. The community had previously held two plebiscites, and I was one of those voting each time to reject the introduction of television, objecting to the fact that the content was going to be entirely in English. When Inuktitut programming was finally included, the community consented to television’s introduction. In my classroom I had first hand experience of the power and insidiousness of this medium.

Within a month of receiving the magic dish, my students, five- and six-year-old unilingual Inuktitut speakers, started singing and humming commercial jingles and could describe the antics of daytime soap opera characters in minute and lurid detail. During recess breaks, playing tag was replaced by aggressive and combative roughhousing, clearly in imitation of wrestling programs, witnessed on the small screen. Within six months, these young children were interspersing English with Inuktitut. In the space of just a few years there were already households where young parents were no longer speaking to their children in Inuktitut. The deceptively benign presence of television beamed an all-pervasive cultural assault and forceful encroachment of southern influence nonstop into our homes.

The promised Inuktitut programming, albeit welcome, was hampered by production styles attempting to replicate southern approaches. While regional content was produced, it was often restricted and inhibited by directions from southern Canadian-based headquarters. The emergence of Igloolik Isuma Productions, co-founded in 1990 by Paul Apak Angilirq (1954–1998), Norman Cohn, Zacharias Saqqaliasi Kunuk, OC and Pauloosie Qulitalik (1939–2012), followed later by Arnait Video Productions (from the term arnait ikajurtigiit, meaning “women helping each other”) in 1991, founded by Atuat Akkitirq, Susan Angutautuq Avingaq, Marie-Hélène Cousineau, Madeline Piujuq Ivalu and Carol Kunuk, was undeniably revolutionary within our community.

Since Arnait’s formation, the collective has gone on to produce three feature-length films, eight medium-length works, eight shorts, two television series and numerous interviews, with three feature- length fiction and documentary films currently in production. From the early to mid-1990s, they captured community events, traditional practices and skills, as well as reinterpreted time-honoured stories through various technologies—including computer animation— before exploring more experimental fiction and documentaries. Set in 1840, the historical drama Before Tomorrow (2009), the group’s first feature-length project, follows Kuutujuuk (Mary Qulitalik) and Ningiuq (Madeline Piujuq Ivalu) and her grandson as they endure a series of hardships after a strange attack devastates their camp. The film received the Best Canadian First Feature Film award at the 2008 Toronto International Film Festival. Together, these Iglulingmiut filmmakers presented Inuit stories while advancing Inuit values through their own lenses and in their unique style.

“I believe the medium of film is central to benefitting my traditions through keeping the culture engaging and living,” explains filmmaker and producer Lucy Tulugarjuk, who began working with Isuma in 1997.[1] “The skills and techniques of the material part of our traditions are still there. The style of delivery may have changed, since we use recordings now; however, our purpose remains the same— to pass on information that is important to and for us.”

Piujuq also believes that film is an invaluable tool to retain and recall memories. “We rely on memory still, as things were not written down,” she explains.[2] “Creating film exercises our intellect, the process of filmmaking itself makes us remember how things were. We are sometimes even able to recapture language that is no longer in use today.”

Filmmakers working in and around Iglulik have utilized this powerful medium to show the world our stories, share our values and offer glimpses into our rapidly changing society, both positive and negative. They have very effectively contributed to the revitalization of Inuit culture and language. Whether it be a demonstration of tending to a stone lamp, as in Piujuq and Angutautuq’s early work Qulliq (Oil Lamp) (1993), where they practice the skills required to maintain and care for a qulliq in the dead of winter. Showing us, in real time, the steps required to heat a snow house. What I and others of my age group had not realized was that there was a unique vocabulary dedicated only to the qulliq and its flames. We had lost the language of flames, perhaps now rekindled for some through this film.

I do not hear Inuktitut spoken here in Toronto very often. In my case, the yearning and need to hear Inuktitut is sometimes a desire so strong that I turn to IsumaTV, where I can watch programs like Kingulliit: The Next Generation (1992). This film shows a meeting of elders, first describing songs, then recording them. The elders discuss the origin, composition, structure and poetry of songs—singing ancient Ajajaa songs, the harmony with the drum. Listening to Francois Quassa and his older brother George Kappianaq’s power of voice holds me emotionally spellbound. The intricacy of lyrics, composition and just plain trying to learn the songs restores my equilibrium for weeks.

Another film I turn to is Attagutaaluk (Starvation) (1992), a story of survival against overwhelming odds captured as an interview with Iqallijuq Okkumaluk. She recounts the ordeal of Attagutaaluk, a legendary historical figure in Iglulik. Attagutaaluk, her family and another family are stranded for months far from the coast. Starvation ensues, until only Attagutaaluk is left. To survive for months alone during the brutal winter, she had to resort to eating the dead. Her rescuers, upon reaching their destination, proclaiming as they approached, “We bring one who has eaten meat,” as dictated to by custom. Coded language, instantly understood by the inhabitants of the camp, to prepare for formal and spiritual rituals to follow in these situations. For myself, again it is the exchange, the art of language between filmmaker and Iqallijuq, the pace of the unfolding story and how it is recounted from oral chronicles that make this a riveting film, not the macabre subject matter.

Iqallijuq was my father’s mother and she had passed unto him all her stories. During the summer evenings as night fell, my father would relate those stories as we, his children, were snug in our warm blankets in our tent. One of my very favourite memories of him is singing songs from legends. My siblings and I, striving hard to stay awake, would eventually be lulled by the ebb and flow of the softly spoken stories or songs and fall asleep often before the end of either. I, like other residents of Iglulik, grew up hearing the Atanarjuat legend during such evenings. What excitement there was in our community when film production began on this epic legend. And, what pride we had in its success. Our story, told our way!

Yes, we no longer live in igloos. Yes, some aspects of our culture are no longer practiced and, yes, the modern world is very harsh on our traditions. Unlike Connolly, I identify with the man watching the film inside the museum rather than pitying him. Inuit have acquired new tools to aid remembering. Iglulik filmmakers have used, and continue to use, Inuit culture as a basis to inform, entertain and impart knowledge to our constantly evolving society; age-old mores, revived and told in a new way. We are not reliving, we are remembering— remembering our relations, remembering our ways.

On a return home for a visit to our traditional walrus hunting encampment at Iglulik Point, our tent was located not far from Atanarjuat’s boulder, Iksivautaujaq. According to ancient Iglulik lore, it was the very one he had rested against. One evening on my visit, I heard children singing Atanarjuat’s song. I credit the inexplicable combination of joy, pride and thankfulness that I felt at that moment to Saqqaliasi, Apak Angilirq, Qaukuluk, Qulitalik and the lasting legacies of Iglulik filmmaking.

Blandina Attaarjuaq Makkik is the Igloo Tag Coordinator for the Inuit Art Foundation and was formerly the Senior Producer for the Inuit Broadcasting Corporation where she developed the award-winning show Taku nai, the first Inuktitut-language children’s program. She has also worked as the Inuit and Native Gallery Director at the Craft Ontario Shop and served as a Land Claims Implementation Advisor for the Government of Nunavut.

Housed in archives across Canada, photographs of Inuit taken largely by southern photographers and ethnologists once told a romanticized story of the North and its ruggedness.…